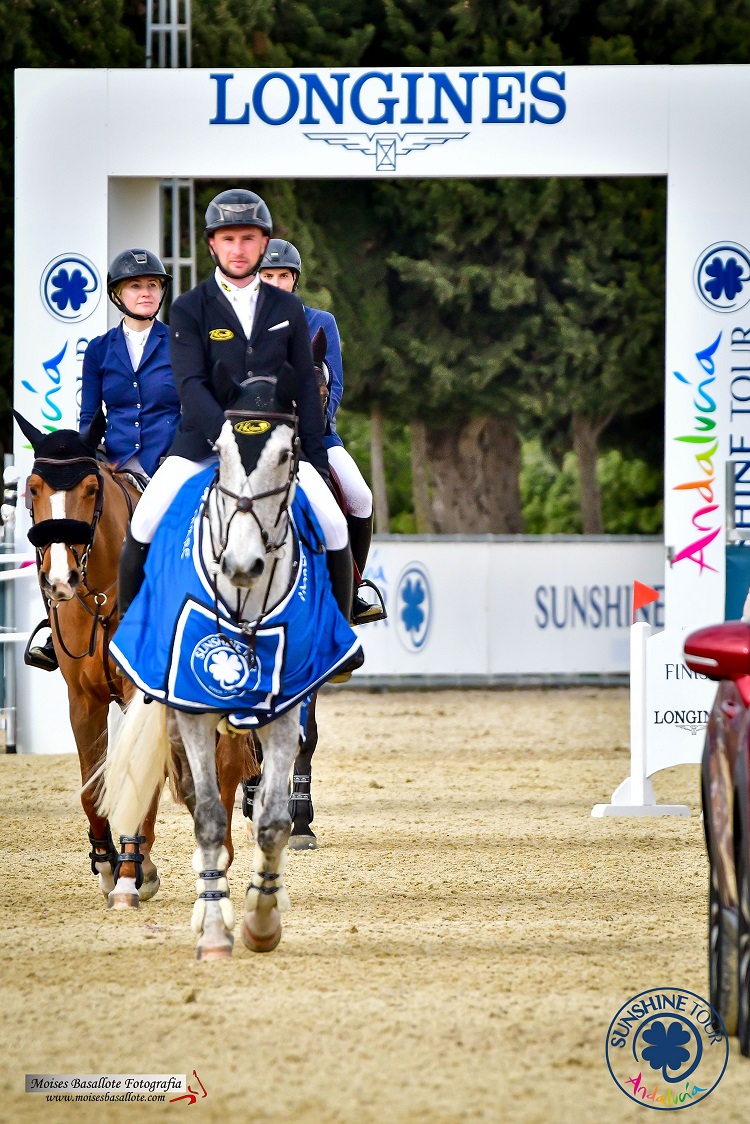 It was an exciting day of jumping here today at Montenmedio with this CSI2* event ending up on a high with the FEI, 1.45m Longines Ranking class; our first Grand Prix for 2022, here at the Andalucía Sunshine Tour.

Nine horses went through to the jump off, from a demanding first round with faults pretty evenly distributed throughout the course.  The jump off course proved to be just as demanding, although first to go, the American Paris Sellon with ‘Anna Jo’, jumped a super, neat  clear round and clearly set up the challenge for the other eight riders.  It looked as if she really might have won the class until the very last rider came in to the ring, Richard Howley on the 11yr old, grey mare who is a new ride for him, ‘Highcross Violet, and who was competing last year with Robert Murphy’.  This pair really have already formed  a great partnership and flew around the course and, with just under a second in hand, slipped comfortably into first place.  This is Richard’s second big win this week as he won the Ranking class on Friday as well, with  ‘Fame’.

Richard told us: “Great to win with Highcross Violet this week as it was our first show together. We bought her a few weeks ago and we couldn’t be happier with the way she has performed this week. She was a fantastic mare with Robert Murphy, and we hope to have continuing success with her throughout the tour. She will get an easy 2 weeks now and then aim for one of the 4* Grand Prixs. We’re very lucky to have a great group of very nice horses and we’re really excited for the coming weeks of the tour”.

Richard’s time was a mere 37.73sec and Paris Sellon with ‘Anna Jo’ who is by Acodetto 2 and owned by Willow Grace Farms, finished on a time of 38.59 sec.    In third was the Argentinian rider Matias Larocca riding ‘Millar Van de Faunushoeve’, who also took sixth place with Tehuelche.  Slotting in between in fourth place was Tim Wilks (CAN) with ‘Guestlist’ and Derin Demirsoy (TUR) was fifth with ‘Hunter’.

The Israeli rider Dan Kremer and his mare ‘Formidable GLN Z’ were the winners of the 1.35m class today, their second win this week after their victory in the 1.30m class on Thursday.  Canadian rider Chris Sorensen with ‘I Know’ was second and the Portuguese rider Adir Dias de Abreu took both third and fourth with ‘Vieny Z’ and ‘Hellix du Seigneur’ respectively. Swedish rider Douglas Lindelöw was fifth with ‘Charlie’s Way’.

Norwegian rider, Cecilie Hatteland was the winner of the 1.30m class with ‘Citoloma Z’ and was way out in the lead, easily beating the time of German rider Helmut Schönstetter with ‘Eic Ambiance du Seigneur’ by over 2 seconds.  With this performance Helmut took second place and also equal third with ‘Chardonnay 79’ alongside the famous Swiss rider, Martín Fuchs riding ‘Commissar Pezi’. Oisin Aylward (IRL) was fifth with ‘Wkd Balou Breeze’ in this two phase class.

In the 1.10m the Columbian rider, Camilo Robayo won the class with ‘Jackie W’.   Larissa Berri (SUI) was second with ‘Cassina’ and once again, Juan Miguel Febrer Riu was in the rosettes, this time with ‘Grace Blue’.

Competition starts up again on Thursday the 27th of January with the second CSI2* and the Young Horse classes, in this Pre-Andalucía Sunshine Tour.  There will also be two FEI Longines Ranking classes, one Friday and one Sunday.

You can follow all the action, streaming live on our app (Android y IOS: Sunshine Tour Mobile) or on the website www.sunshinetour.net.  There you can find all the details of each class, entries, results and jumping times etc.  You can watch live and also click on a horse/rider to watch a video of any of their rounds  in each class.