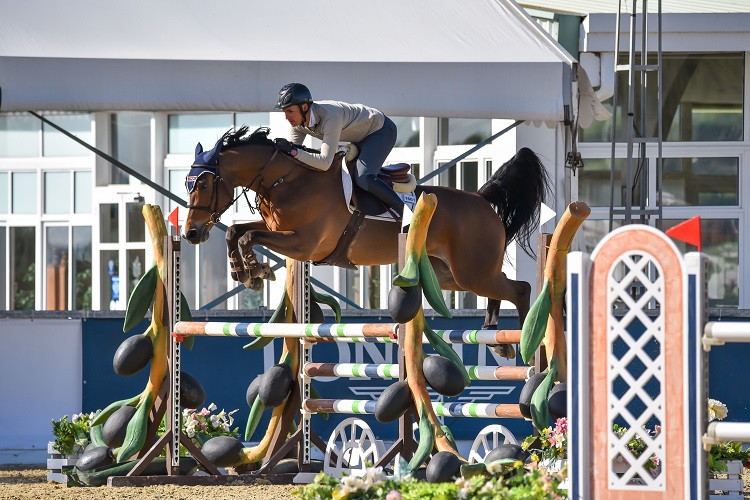 win with ‘Kristal’s Beauty B’ and ‘Cidfire EN’ respectively; a great start to the sixth week here at the Andalucía Sunshine Tour

The sixth week of Competition started back up today here at Montenmedio’s Andalucía Sunshine Tour.  The Young horses were out in force, with two classes in each section and all jumping on the geotextile arenas.

The winners in the two 1.30, 7YO classes were Kevin González de Zárate (ESP) with ‘Kristal’s Beauty B’ who is by ‘F one USA’ (x ‘Inshallah de Muze’) and in the other class, the Swedish rider Jacob Hellström with the Helmo Stables and Wallflower Equestrian AB owned, ‘Cidfire EN’.

In the first class there were 69 horses and 45 clears. Our winner, Kevin, stopped the clock in 29.89s in the second phase of this 2Ph Sp, with the very athletic mare, ’Kristal’s Beauty B’ who is owned by the Yeguada Valbanera.  In second place was Suzuki sponsored, Spanish rider, Jose Fumero Hernández, with ‘Figuier du Roc in a time of 30.74s, and in third was the French rider, Guillaume Foutrier with ‘Justicier de Pandore’.  Fourth was another Spanish rider, Hugo Álvarez Amaro with ‘Epic del Maset’ and fifth was British rider, James Whitaker with ‘Just Call Me Henry’.

In the second 7YO class there were 69 horses jumping and 46 clears. Jacob Hellström ’s winning time was 28.60s with this very fast gelding ‘Cidfire EN’ who is by Corporal VDL x Zeppelin.  In second was the Irish, Anthony Condon who finished his round in 28.90s with ‘Bellevue Celestial’.  Bianca Babanitz (AUT) was third with her lovely mare‘Bella e Impossibile BBA’ who is becoming quite a legend here in these classes as she is rarely out of the rosettes.  In fourth was Belgian rider Jan Vinckier with ‘Kanula’ and in fifth was the german rider Marc Bettinger with ‘Fevrier de Hus’.

There were 197 horses in the 6YO classes and 119 went clear.  In the 5YO classes there were 100 horses, with 66 clears.  Each clear a horse jumps in all the Young Horse classes,  is added to its individual tally towards qualification for the Finals next week.

Tomorrow and Thursday we continue with the Young Horse classes.  On Thursday the classes for the mature horses begin in the CSI 4*.  This week, in total we will hold 50 classes with more than 1,600 horses taking to the arenas.  Prize money will be around 300.000 euros.  There are six world FEI Longines Ranking classes and the highlight of the week will be the Suzuki Grand Prix class held on Sunday and the highlight of the week.