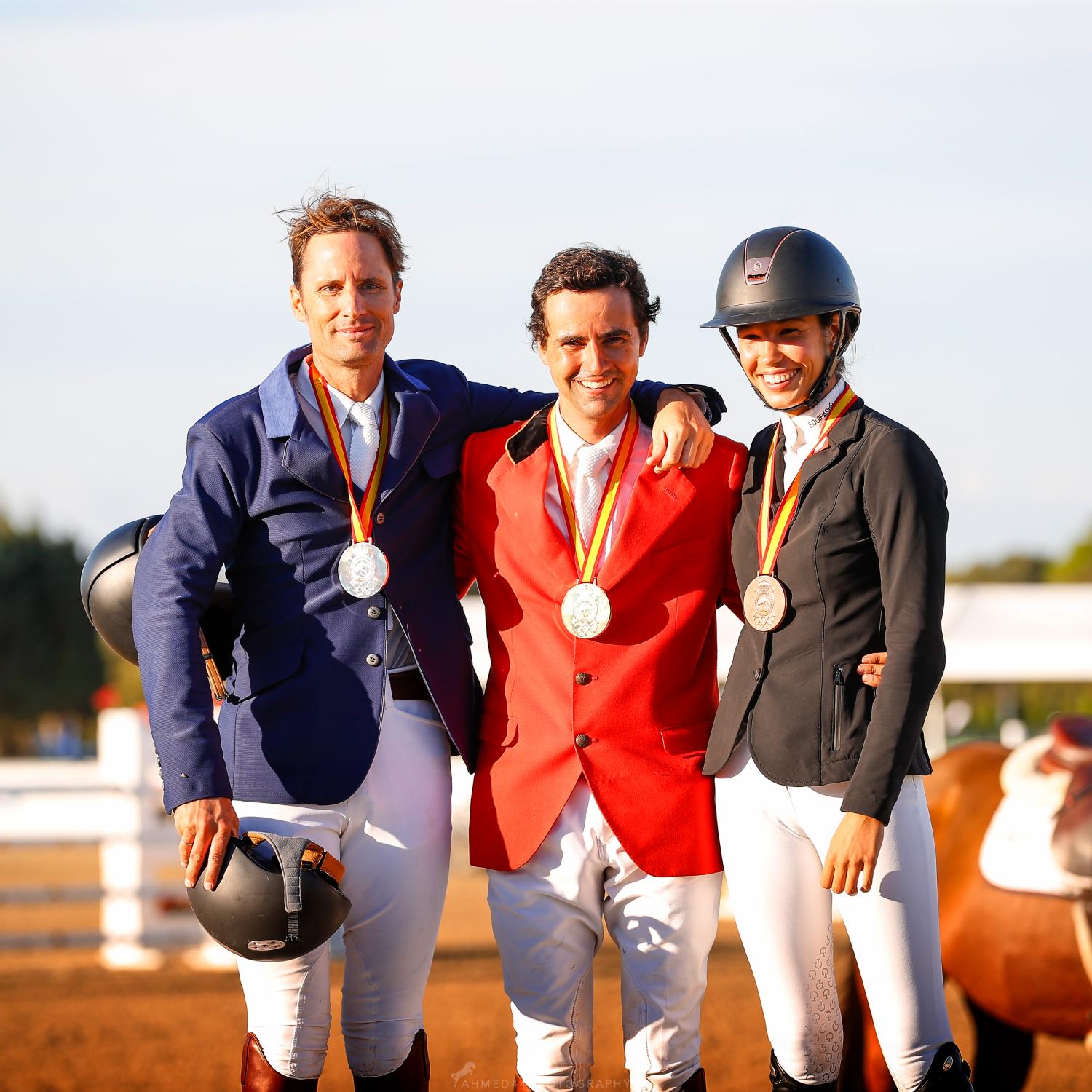 Leticia Ortiz riding Cawavanta, from Madrid, was the well deserved Gold medal winner of the 1.10mChampionship.  The pair completed a foot perfect campaign and finished without a single fault added to their championship score after all three rounds.  There was a jump off for Silver position won by Isabel Soriano from Valencia and her mare Hermione van’t Bijlebos in their very first participation in the Spanish Championships.  Bronze went to Ainoa Calviño from Galicia who returned to competition after a three year break, riding Julietta del Amor.

The 1.20m Classic section was very exciting right up to the finish, with the audience here enjoying a very competitive jump off between the seven competitors aiming for a podium finish.  In the end only two combinations jumped clear.  Jorge Juan Ruiz who is from Ceuta, riding his 6yr old mare Sweet Dreams, were the fastest and took Gold.  Noelia Bayarri took Silver and was just a few seconds behind the winner, riding a relatively new horse in her stable, Polka de Olid. With a faster time but taking the last fence down, Bronze went to Elena Gandía and Double R Miracle.

The 1.30m was another exciting section of the Championship.  There were 8 combinations through to the jump off, all aiming at winning a medal and four of these finished their Championship challenges with no faults on their scoreboards.  In the end a few hundredths of a second separated the medal placings.  Patricio Valdenebro and Klimax Van Het Lindehof took the Gold medal in 34.11s.  With a time of 34.51s Marco Juncadella and Urbain des Grezils took the Silver and just 0.28s behind was Otti Verdu taking Bronze with Princesse de V.

The second round of the Young Rider section of the Championships and the Classic 1.40m section was also held today.

In the 1.40m only two riders managed to jump clear within the time in both rounds and hence didn’t add to their total faults.  The first round was challenging and the second round had a very tight time allowed, with the result that many riders clocked up time faults and/or poles down.  This meant that only the amazing rider, Eduardo Álvarez Aznar with Ike, who now lead the Championship; and the winner of today’s round, Jesús Garmendia with Valut 2 went clear in both rounds.  After these two rounds of testing jumping, the riders at the top of the leaderboard in the Championship are Eduardo Álvarez Aznar, followed by Ricardo Jurado and in third so far, Álvaro González de Zárate.

The Young Rider Championship track seemed well within the competitors talents today.  Despite this only three riders actually jumped clear rounds.  Natalia Ramírez riding Macao, had the fastest round.  She was followed by Alex Codina riding My Passion VD Donkhoeve, who now pass up to the top of the provisional leaderboard.  Diego Ramos Maneiro riding Texas de Trebompe had a great day and has climbed up the leaderboard placing himself in provisional Silver.  These three riders have the podium positions as we go in to the Finals tomorrow held at 10:30.