The Marseillaise sounds out for the winner of the Catunambu Trophy 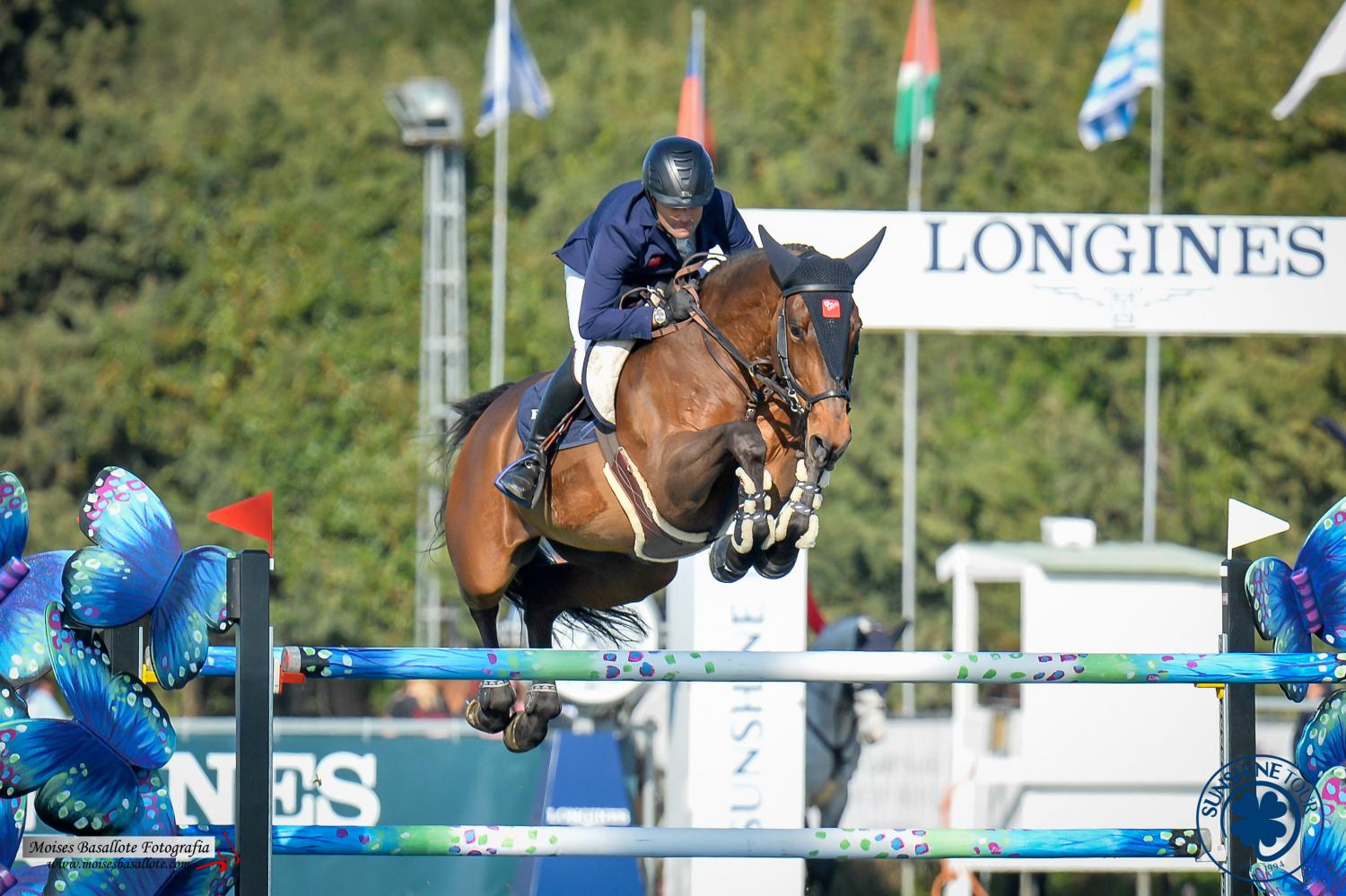 The Indiba Grand Prix and the Medium Tour Grand Prix are brought forward one day to Saturday.

Today was an intense day of competition here at the Dehesa Montenmedio installations.  There were classes at all the levels and 6 arenas were at full swing all day.  With Sunday’s Equine America Grand Prix looming on the horizon the second, FEI Longines Ranking class was very competitive.  It was a 1.50m class, held under Table A with a jump off, there were 91 entries and just 15 competitors went through to the second round.  After two for perfect rounds, the very fast French rider Olivier Perreau and his very athletic mare “GL Events Venizia D’Aiguilly” were proclaimed the winners.

It is the first time at the Sunshine Tour for this pair but they are very well known on the circuit having won the important CSI5* Le Saut Hermès in 2019 and the Italian Grand Prix class of the CSI4* de Gorla Minora.  Today here in Vejer de la Frontera, they won again, just a few hundredths of a second in front of the Czech rider, Ales Opatrnyunas with “Gentlemen VH Veldhof”.  “I am very happy to be here at the Sunshine Tour, as I haven’t been here before.  I haven’t heard anything but great things about this Tour and the truth it is a fantastic competition, it’s designed around the riders and the horses.  The organisation is exceptional and the course builders are excellent.” Speaking to us about his win today he told us  “My mare jumped the first round extremely well today and she was very fast around the jump off course, she is naturally a very fast mare and today she jumped really well.  Let’s go for the Grand Prix on Sunday!!

In third place was the brilliant rider David Will, who also won yesterday’s big class.  Today he was riding the lovely gelding “Ted”.

Álvaro González de Zárate was the only Spanish rider who got through to the jump off in this class with “Dry Corn” (by “Diarado” dam sire “Cornet Obolensky”) but both he and Manuel Fernández Saro who had an unlucky pole in the first round, have qualified to jump in Sunday’s Equine America Grand Prix.

The Medium Tour C, 1.45m class was the second Longines Ranking class of the day.  It was won by Richard Vogel as he demonstrated once again, how consistently well his horses are jumping.  Today he was riding “Ride Smart Never Walk Alone” with whom he who won a class last week.  Luca Moneta from Italy was second on “Etoile VD Wijnhoeve” and the regular British favourite here at the Tour, Matthew Sampson was third with another horse that is consistently on the podium, “Curraghgraigue Obos Flight”.

Richard Vogel told us it's an honour for him to be here working at the Tour’s installations with his horses and his team.  “The team includes the riders David Will, Nicola Pohl, Veronica Tracy, Annabel Joost, Donald Whitaker and me. We have 14 horse with us and I rider eight of them.  My plan is to continue preparing the young horses and building their confidence as they learn to compete in different arenas and on different surfaces. Then we gradually introduce them to compete at greater heights. The older horses I want to get fit, fresh and ready for this year’s season.”

In the biggest class of the Small Tour, Spanish rider Javier González Fraga and his 9yr old“Bubalu” were the winners. Javier, is a veterinary surgeon who breeds horses here in Spain and the quality of his horses are somewhat of a reference for quality in the sport here. ““Bubalu” is one of my homebreds, I have worked with him right from insemination of the mare, all the way through gestation, birth, raising him and breaking him in, right to this moment! So it is very special to win a class with him.  We have done three classes here at the Sunshine Tour and won two of them!  In last weeks Grand Prix he was clear in the first round but had a knockdown in the jump off.  Which was a shame.  I didn’t have enough experience for a GP jump off and I got one of the doubles a bit wrong so we had the fault there.  There were 94 horses in today’s class and I knew the only way to win was to go very fast and to take out strides.  The turns to the two combinations were the hot spots where you had the opportunity to gain time.  I was watching the class on the live streaming  and I saw where it was possible to remove a stride.  So I risked it and I won!”

Javier, who nickname is Fino, has also brought six young horses to the Tour this year.  “I have already qualified four of my young horses for the Finals next week, two in both the 5yr olds and the 6yr olds.  The other two need one more clear round each in order to qualify and we have both Monday and Tuesday to get this done.

I have to add that I am really very proud of all the horses that I jump as they are like my own children.  They are all homebreds from insemination right through to where they are now. and this gives me a lot of satisfaction!”

This class had a lot of entries and was held in the main, David Broome grass arena.  It was a Table A, fastest time class and competition was fierce.  Irish rider, Kellie Allen and French rider, Stanislas de Malet finished off the podium places riding, respectively, “Beetlejuice” and“Urican”.

Tomorrow there are the Grand Prix classes for the Small Tour which will be held on grass in the Guaraná Champeix and the Medium Tour which has been moved forward one day, as has the Indiba sponsored GP.

All classes can be followed live on ClipMyHorse.TV and both the Sunshine Tour web page or on the Mobile app.