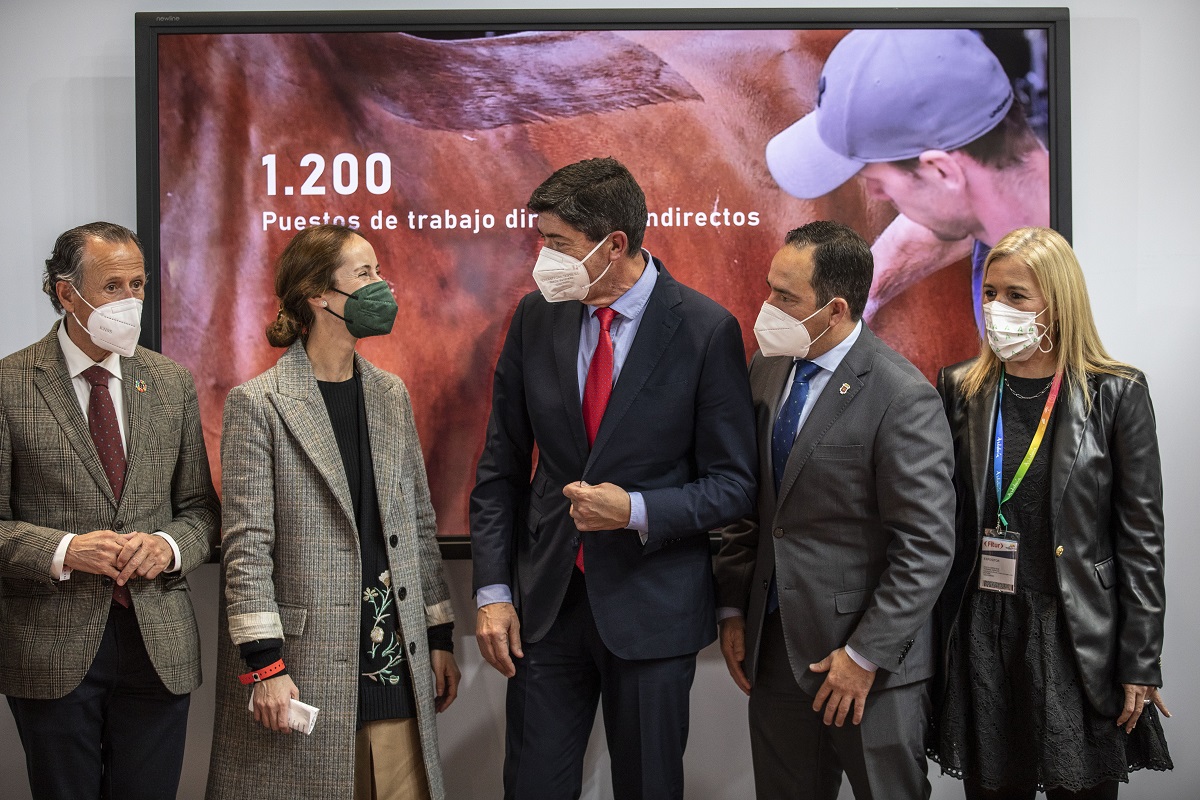 This important equestrian event was presented at the Tourism Fair

With the main highlights this year being the unveiling of the largest removable indoor arena in the world, at 90 by 62 meters and, an extra two weeks of competition this January

The ‘Andalucía’ Sunshine Tour, is the equestrian competition based at Dehesa de Montenmedio, located in Vejer de la Frontera.  Today the Sunshine Tour presented this year’s calendar of events at the Madrid International Tourism Fair, FITUR, 2022.  This year’s season will be made up of 12 weeks of important international competition and, this year, the much anticipated, removable covered arena, will be inaugurated.  The new arena further adds to the expansive facilities at the Sunshine Tour and will be used to hold world class jumping events alongside more than 20 other arenas of both geotextile or grass, here at the largest equestrian installations in Europe.

This important equestrian event was presented at the Tourism Fair by the director of the Andalucía Sunshine Tour, Teresa Blázquez; the vice president and councillor for Tourism of the Junta de Andalucía, Juan Marín; the Cádiz Tourism delegate, María Jesús Herencia and the president of the Spanish Equestrian Federation, Javier Revuelta.  The top level of competition taking place at the Sunshine Tour was highlighted,  including the facts that there will be 42 FEI Longines Ranking events and also qualifier events for the Junior European Championships.

During the Sunshine Tour which runs from February 8th to March 27th, more than 700 riders and 2,500 horses, from 50 different countries, will compete at Dehesa Montemedio.  Overall the show will give out more than two million euros in prize money.  In addition to the Tour itself the facilities will host a two week ‘warm up competition’ just beforehand, from January 20th to the 30th, and these preliminary weeks also include four FEI Longines Ranking classes.  There will also be  2* championship classes and Young Horse events.

This event has been dubbed the ‘Andalucía Pre Sunshine Tour’ and this year there will be around 100 riders participating, from 25 countries, with about 300 horses.  Many famous names will be competing here, including Martin Fuchs from Switzerland who is currently ranked number two in the world;  Swedish rider, Douglas Lindelow;  the American rider, Paris Sellon; the Israeli rider, Dani G. Waldman and the Egyptian rider, Karim El Zoghby.

In addition to all of the above, in October, due to a very successful organisation last year, Montenmedio will once again be the venue for the Spanish Jumping Championships, the categories will be, Absolute, Young Riders, Classic and Young Horses.

As FITUR is a Tourist Fair, the enormous attraction of the Sunshine Tour to tourists was highlighted in the presentation.  8,900 people are accredited for the event and the Tour creates both directly and indirectly 1,200 jobs.  The estimation is that 20,000 overnight stays in hotels are created by the Tour and the average daily spend per person is 256 euros.  This generates 40 million euros in economic impact for the region of La Janda.

The director of the Sunshine Tour, Teresa Blázquez, noted that;  "the Sunshine Tour is a consolidated and long-anticipated event for the world of international equestrian sport.   Thanks to the privileged location of Dehesa Montenmedio, competition can go ahead outdoors in the open air, when in the rest of Europe at this time of year,  this is impossible.  In addition to this it has much to offer the tourist with matchless gastronomical, and cultural experiences”.

For his part, the Vice President of the Junta de Andalucía and Minister of Tourism, Juan Marín, noted that;  “we have signed a three-year sponsorship with the Andalucía Sunshine Tour, so that it forms part of the ‘Andalucía branding’ and continues to be a unique product,  and a benchmark in the world of international equestrian sport.  It is also much more than a sporting event, it is a great social event”.

The new covered arena, which involved an investment of 750,000 euros, will be inaugurated in February and expands and complements the already extensive sports facilities on offer at the Dehesa Montenmedio.  The new covered area will allow competitions to be held comfortably and safely when the weather conditions are unfavourable and will be both versatile and functional thanks to its removable nature.

The arena is 90 meters long by 62 meters in width, giving a clear span area of ​​5,850 meters squared.  It is made up of a two-layered cover that is a PVC-coated polyester textile membrane melded to high-frequency Keder.  The two layers form an air chamber that provides great thermal insulation and better wind resistance.