272 Young Horses classify for the Finals 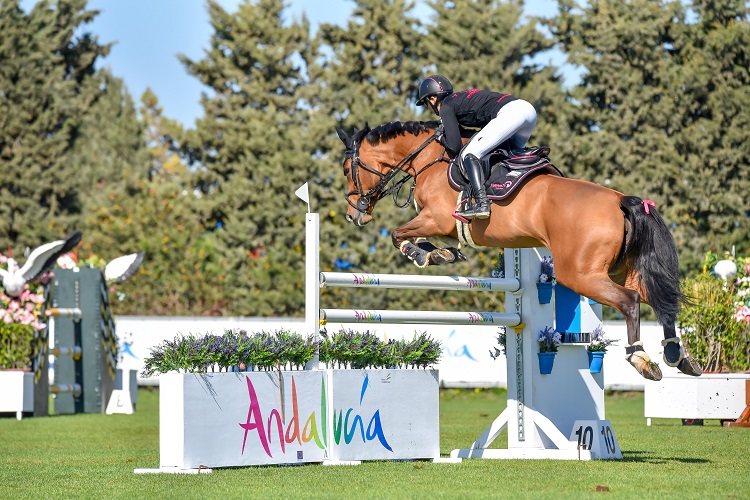 Tomorrow we hold the Young Horse Finals with 61 qualified in the 5yr olds, 127 in the 6yr olds and 84 in the 7yr olds

A total of 272 Young Horses have qualified with the minimum, four clear rounds, for the YH Finals which will be held tomorrow 23rd February.  61 will jump in the 5yr old Finals,  127 in the 6yr olds and 84 in the 7yr olds.

Today’s results:  The 7yr old mare ‘Bella E Impossible BBA’ (‘Lavagon’ x ‘Lando’) ridden  by Austrian , Bianca Babanitz was once again on the podium in this speed class.  They won their section in a time of 66.23s and they are considered to be one of the favourites to win the 7yr old Final tomorrow.  Just looking at their results here, with three top placings on the podium and one second, their time here at Andalucía Sunshine Tour, really couldn’t have been a lot better.

Both second and third placings in this section, went to French combinations.  In second place, but well over 6 seconds slower, was ‘Lorenz 86’ (‘Livello’ x ‘Clarimo’), ridden by Yann Chartier Capitaine and in third was con ‘Faustine Sauvage’ (‘Kannan’) ridden by Olivier Perreau.

In the second section, ‘Campino MR’ (Colestus x Clinton) was our winner ridden by Helmut Schönstetter from Germany.  These two have had consistent results with two second placings and a fourth in week one and two more clears in week two.  Today they stepped up to the mark and stopped the clock in just 68.03s beating the second placed pair by over four seconds.  In that second place with a steady clear, was the gelding ‘Petitfour VD Wareslage’ (Corydon Van T&L) ridden by Jocasta Symons (GBR).  In third place was ‘I’m Fancy VDM Z’, a mare who hasn’t touched a pole in all her classes over the two weeks so far and who is ridden by Kendra Brinkop who is also from Germany, another combination we expect to be at the top of the placings tomorrow.

There was a Spanish win in the first section of the 5yr olds, ‘Jolie Van Der Berghoeve’ (Jaguar VD Berghoeve x Kannan) ridden by local rider. Carlos Bosch Cebrian.  They stopped the clock in 30.65s in this 2phase Sp class.  This pair have had 6 clears in all here and are also amongst the favourites for tomorrow’s Finals. Kendra  Brinkop rode ‘Oak Grove’s Heartthrob’ (‘Heartbreaker’) into second place, these two have not had a pole at all here at the Tour;  and in third was ‘Chacera’ (‘Harley’) ridden by Irish,  Adam Morgan and who has 5 clears now from 6 outings.

In the second section ‘Eldorado’ (‘La Calidad’) was the winner, another horse with 6 clears from the 7 classes jumped and ridden by Polish Maksymilian Wechta. Second was ‘Diderot Z’ (Diamant De Semilly’) ridden by Isarali, Dani Waldman, and, in third was ‘Quando VD Bisschop’  (Harley VDL’) ridden by Dutch, Rossje Brouwer.

In the 5yr old class there was also two sections:  Spanish rider Carla Mateu Rapinat steered ‘Hors Taxe ST Aubert’ into first place (another lovely young horse by the recently departed ‘Diamant De Semilly’).  ‘Gasalano’  (‘Gerardus’) was second with the Dutch rider Juli Thomsen and in third was ‘Chaclaire’ ridden by the Enrique Camiruaga for Spain.

In the second section the stallion ‘D&J Obelix’(‘D&J Havanna’) ridden by Belgian Dries Dekkers was our winner and his record here has been extremely consistent with only one pole down in 7 outings.  ‘Sandra de la Marchette Z’ with Spanish rider Carla Mateu Rapinat was second in this section and in third was ‘Contessa Z’, with Norwegian rider Siri Bakken.

As well as the YH Finals tomorrow, we also will be holding the YH Farewell classes.