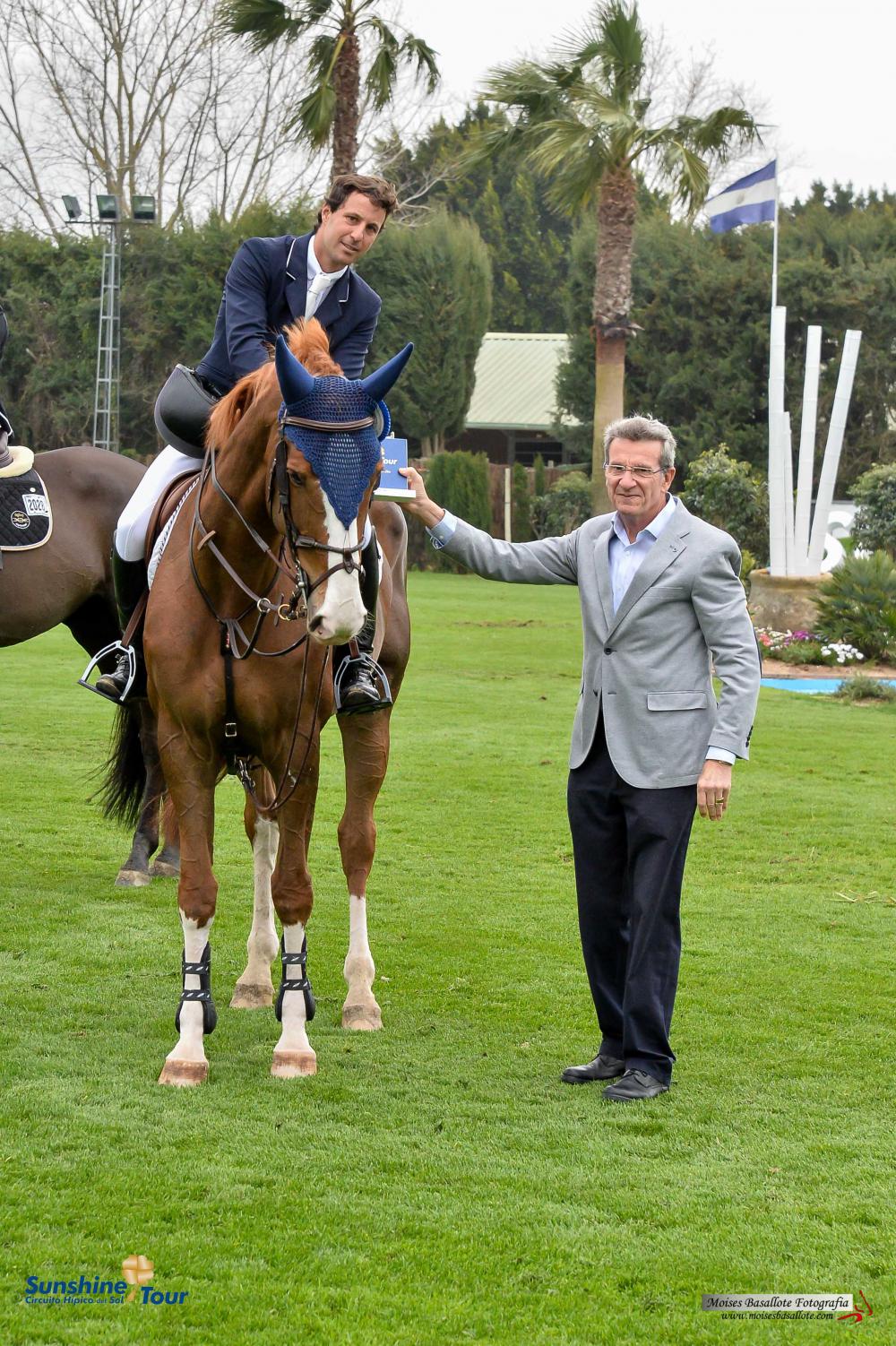 He won this 1.50m, FEI Longines, Ranking class with a spectacular round riding Sun Flower Du Theil (Allegreto x Ophelie Du Theil) in just 34.72sec; beating 13 other riders that got through to the jump off in this demanding class set by the course designer Javier Trenor. This is not the only big success this pair have achieved at the Sunshine Tour in this class; they also took second place on the 23rd of Feb.

Guy Williams (GBR) also was extremely fast and took second place on Rouge De Ravel in 35.51sec. Just behind in third was Reed Kessler (USA) on Tradition De La Roque in 36.28sec and in fourth, was the German rider Torben Köhlbrandt on Macao in 37.99sec. Ellen Whitaker (GBR) was fifth with Arena UK Winston in 38.43sec.

In the 1.45m, Big Tour C, the Jordanian rider Nasauh Kayali on Adette was unbeatable stopping the clock in just 33.57sec. The Italian rider, Luca Moneta on Neptune Brecourt was second in 33.70sec. The Swedish rider Stina Lillje on Candlelight K was third in  38.23sec.

There were two sections in the Big Tour B, with 131 entries overall. Egyptian rider Abdel Said on Coerly Sue, was the winner of the first section whilst the Canadian rider, Rebecca McGoldrick on Duco, took second; the Spanish rider Antonio Mariñas on Victoire Landaise, third. In the second section of this class the British rider, Simon Crippen riding Atlanta VIII was the winner and in second was the Belgian rider Dominique Joassin on Cado De Greenbay and once again on the podium, this time in third, was Stina Lillje, on Hot Stuff.

In the A2 Abdel Said once again took first place this time on Beauminka. Second was the British rider Chloe Winchester, on Sportsfield Our Clare and in third was the rider from Belgum, Virginie Thonon on Kamara Du Chabus.

The A1 was won by Mohamed Al Ahrach from Morocco on Corinne. Second and third place went to Spain, with riders Jaime Gabarrón on Gabanna and Carlos López-Fanjul on Cerano (resp).

The 1.40m, Medium Tour was won by British rider, Abbe Burchmore-Eames on Wilandri. The Israeli rider, Dan Kremer on E-Contefino-A.C was second and the Spanish rider Otti Verdú Vidal on Top Lulu was third.

In the 1.35m Medium Tour the winner was Veronica Paige Tracy (USA) on Zuidam, second and third were the British riders Eleanor Hall Mcateer on Dazzle II and Abbe Burchmore-Eames, this time riding Casti Aneira.

The 1.30m Medium Tour was won by the Spanish rider Otti Verdú Vidal on Twiggy KA with the British rider Pollyanna Gredley in second on Unex Omega Star and the Dutch rider Doron Kuipers on Zucces in third.

The winners in the three classes of the Small Tour were: Brazilian rider Giovanna Sobania with XK Atomo Clasi; British rider Kerry Grimster with Boombastic and  another British rider, Rachael Evison on Scylla D’Ouilly.