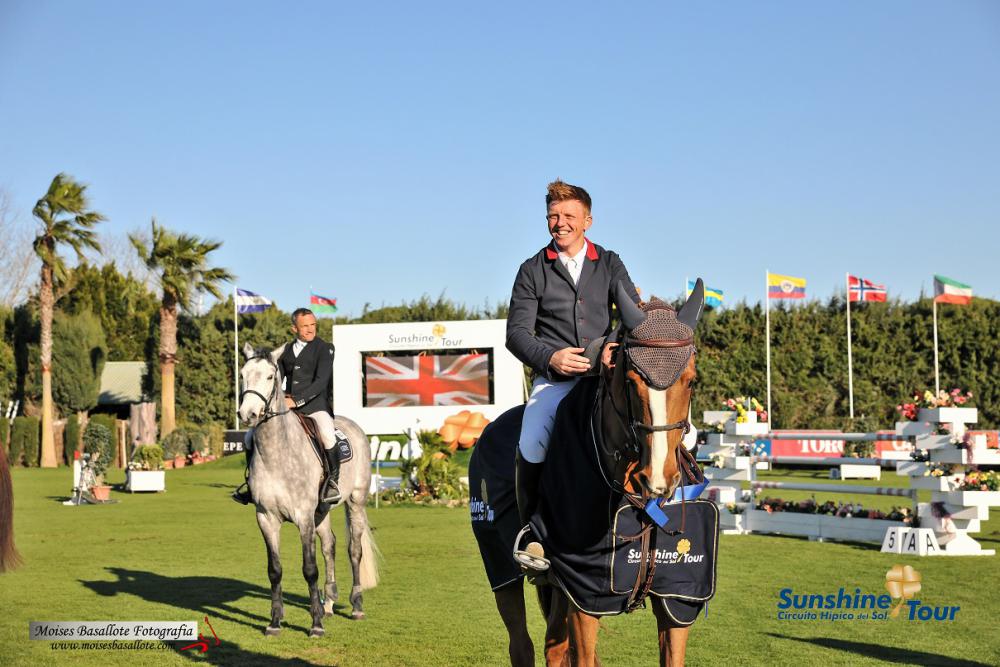 Tomorrow we begin the last weekend of CSI 4* jumping here at the Sunshine Tour for this year. On Sunday the Tour ends with the Invitational GP and prize money totalling 100,000 euros.

Today was the climax of the Young Horse classes here at the Sunshine Tour. 219 Young Horses participated in the Finals of the year groups with each class proving to be very competitive and run over interesting and testing tracks.

The 7yr-old Final was on grass in the David Broome Main arena and it was a substantial course of 1.45m, with only six horses getting into the jump off. The winning horse was Cristo Beech (It’s The Business / Ragua by Cantero); ridden by the well known British rider, Matthew Sampson. First to go in the jump off, he rode a careful yet brave round which proved to be unbeatable. He stopped the clock in 39.07sec. Cristo Beech originates from the Beech House Stud run by the well know rider, producer and trainer, Derek Morton. Matthew has been riding him since he was a 5yr-old and bought him outright after deciding he really liked the horse. Matthew is a regular at the Sunshine Tour and has been coming here since he was 16 years old.

Matt told us, with a big grin, ‘this is a big ask for the horse and I am really thrilled with him’.

In second place was Boy de Lancon (Lenett / Toronto by Cassini II). This grey Holsteiner gelding was ridden by the French jockey, Olivier Robert and is co-owned by the rider and Pauline Vauthier. They took second place in a time of 41.97sec. In third place was Billy Tudor ridden by the British rider, Lucy Townley. Billy Tudor was bred by Donal Barnwell is by Cevin Z/Annagroff by Andiamo Z. He completed the jump off course clear in 49.85sec.

There was a second British win in the Final of the 6yr-olds. The winner was Hot Bluebird who has an impressive pedigree, she is by Plot Blue, her dam is Ulette and her dam-sire Heartbreaker.

Ridden by William Rekert, this mare is owned by Thomas Williams. William and Hot Bluebird beat 25 other combinations in a testing and fast jump off, stopping the clock in 32.90sec.

In second place was Cordouan Fontanel by Kannan / Circee De L’Erdre by Jalisco B, ridden and owned by the internationally successful Irish rider, Trevor Breen. This pair stopped the clock in 33.43sec. In third place was Mendini Van De Hunters (Scendix / Cleopatra by Cassini I) ridden by the Swedish rider Antonia Andersson and owned by Hunters Stud farm. They stopped the clock in 33.85sec.

The 5yr-old Final was won by the very well bred mare, Rossa Lough Derg (Luidam / Cruising Lough Derg by Cruising). Ridden by another very successful Irish rider and owned by Jonathan Reape and Cathal Mcmunn; they stopped the clock in the jump off in just 36.68sec.

Tomorrow once again we kick off the end of the week with the three Tours and 11 classes (3 in both the Small and Medium Tours and 5 in the Big Tour ).

The CSI 4* continues until Sunday and will end with the best riders from this year’s Sunshine Tour, competing in highlight of the whole Tour, the Invitational GP with prize money of 100,000 euros. We hope to see you with us over this last weekend to enjoy watching some of the best riders and horses in the world competing.