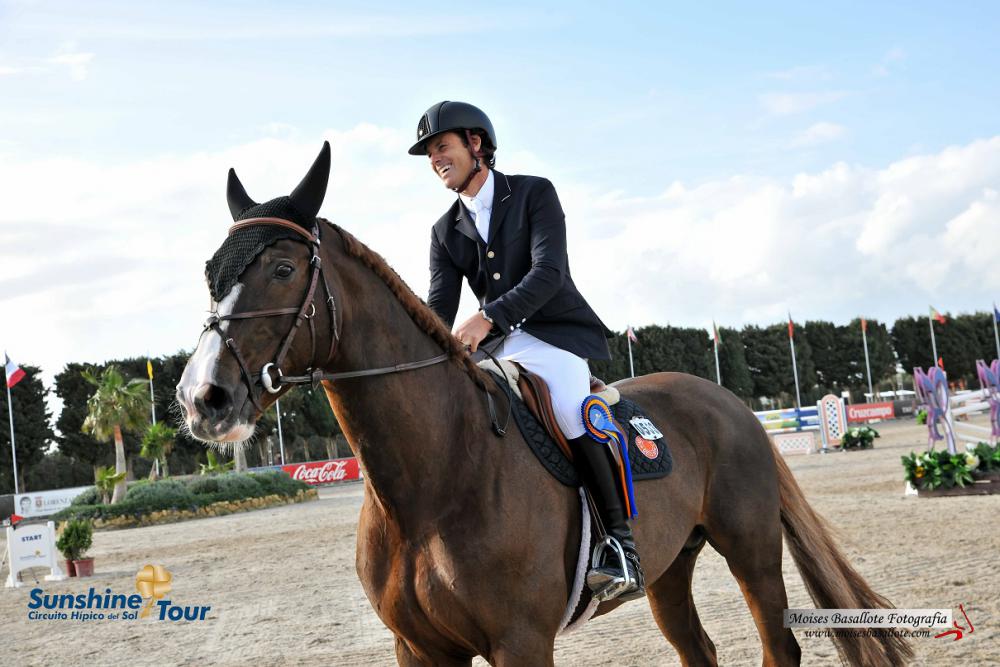 The Class was sponsored by The Ayuntamiento of Barbate. British rider, David McPherson on Best Of Adriers and Moroccan rider, Youssef Salmeron on Levis De Muze were the section winners of the 7yr-old class.

British rider, David McPherson on Best Of Adriers and Moroccan rider, Youssef Salmeron on Levis De Muze were the section winners of the 7yr-old class

The CSI3* continues tomorrow and over the weekend and includes a FEI, Longine’s Ranking Class.

The winner of the Big Tour GP today here at the Sunshine Tour was Brazilian rider Pedro Vennis with Anaya STE Hermelle (Andiamo x Gazelle Blues). The class, sponsored by the Ayuntamiento of Barbate was a qualifier for the Big GP on Sunday. This combination did a cracking clear round in this 1.50m, speed class, beating 144 other riders in a time of 66.70sec. Second place was taken by the Irish rider Gerard O’Neill on Castlefield Vegas; just over a second slower in 67.72sec. In third was the German rider Marcel Marschall on Cassius van de Smis in 68.29sec. The Dutch rider Doron Kuipers on Charley was fourth and the British rider Guy Williams on Dalton D&Hoyo fifth.

The Young Horse classes continued today with a few aiming to get their last clear, of seven, needed to qualify for the Finals next week.

The Moroccan rider Youssef Salmeron on Levis De Muze was the winner of the second section of this class stopping the clock in 63.38sec. Second was the Columbian rider Mark Bluman on G Laloma Tag (Vleut x C-Laloma)in 66.38sec. In third was the rider from Finland, Piia Pantsu Jönsson on Beginning (Bravour x Upper-Lady) in 66.89sec. The Spanish riders Jaime Gabarrón on Mago de Quijas (Indoctro x Moon De Gamel) and Mariano Martínez on Tatabro Bis took fourth and fifth.

This was the penultimate jumping day for the Young Horses, next week they have one opportunity to achieve their final zero. We have the finals on Wednesday 21st of March. So far, 240 horses have already qualified. 67 in the 5yr-olds, 104 in the 6yr-olds and 69 in the 7yr-olds.

There are 12 classes tomorrow including the 1.50m, Longine’s Ranking class which will start at 14:00 in the David Broome arena. See you all there!