The Czech rider, Ales Opatrny sets the pace in the Grand Prix sponsored by the Junta de Andalucía 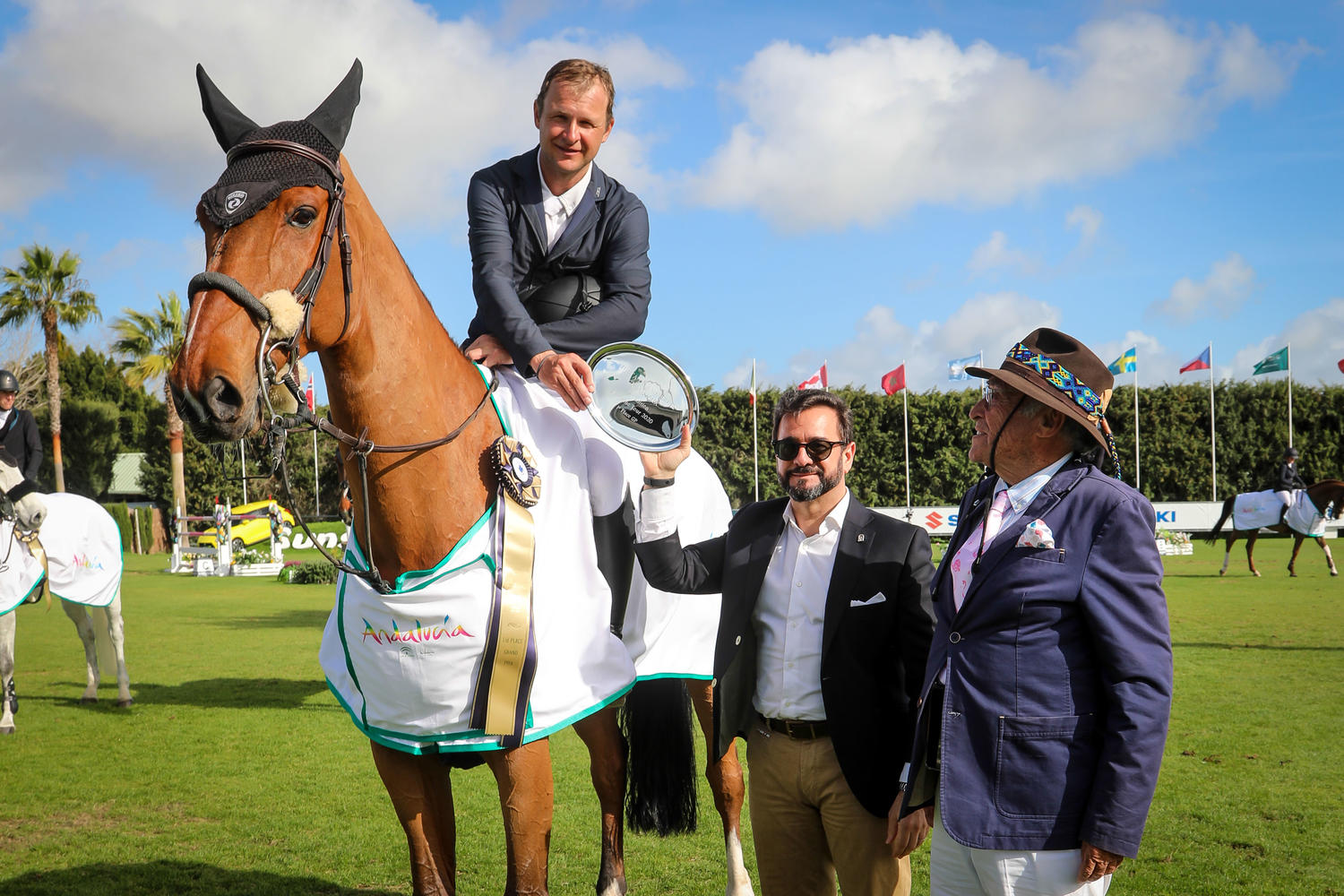 British riders finish off the week with a plethora of successes.

The main grass ring here at Montenmedio was back in use after a day of maintenance and a light overnight shower. The ring was as fresh as the first day of the Tour with very ‘extraordinarily’ good going according to the course designer for this CSI4* Grand Prix, Javier Trénor” (Chape).

Against all the odds this Junta de Andalucía sponsored GP, proved to be less complicated than the riders thought when walking the course. This was helped along by a time adjustment at the start of the class, with the time allowed being extended to 77sec. “I thought that the last line was going to give the riders more options in striding. However they have ridden it really easily in 5 strides when I thought that by giving them 25.5m to the last fence a few riders would do 6 strides. ” Despite this there was a surprisingly high number in the jump off, 13 in all. ‘Chape’ told us that “I am happy with the results, the horses have jumped the course comfortably for such a big track and they did it more easily than I expected.”

The Czech rider Ales Opatrny was also very happy with his day, his time in the jump off was extremely fast with the 9yr old gelding, “Forewer”. Ales knows him really well, he told us; “he was born and bred at home. Forewer jumped really well and even though it was not an easy track he did it without any problems. He is a very fast horse”.

The Japanese rider, Eiken Sato and the Italian, Alberto Zorzi both went in to the jump off clearly meaning to win. However such fast riding meant that they picked up faults. Not so for the Swedish rider Angelie Von Essen riding the experienced mare “Cochella” who took second place. In third was Vincent Voorn with “Diva” with a super round for these two, who are regulars here at the Sunshine Tour.

The 1.45m, Big Tour C was held in the Milton arena and was a very fast and exciting class to watch. There were 94 entires and many riders really rode to win. Making it look pretty effortless was the Canadian rider, Rebecca Mcgoldrick on her own, “Horatio Van Erpekom”. She went in the ring a little after her compatriot, Kara Chad who had just gone in to the lead on, what seemed an unbeatable time but in the end Kara took second place on the very speedy “Firefly W” who is owned by the British rider, Matthew Sampson.

The 21yr old Jessica Hewitt was once again at the top of her game and continues her winning streak here at Montenmedio. This week she has been extremely successful and finished in the top three practically every day that she has competed. Today was the highlight of the week as she won the Medium Tour Grand Prix, sponsored by La Equina, riding the super mare, “Chilli” “She is a machine! Yesterday she was third although I was really keeping her for today. She is an especially clean jumper if she has a fence down, it’s my fault”. Jessica was also the winner of the 1.35m, Medium Tour B, this time riding “Hot Bluebird”. A great finish to a successful week.

Another one of the fastest British riders here at the tour is Kayleigh Watts and today, riding“Harley”, she took the win in the 1.30m Big Tour beating off the Brazilian, Carlos Eduardo Mota Rivas and Mohamed Al Ahrach.

The three classes in the Small Tour were completely dominated by the Brits today, Charlie Jones and “Crocus la Sillardiere” in the 1.35m; Adam Taylor and “Annabel Z” in the 1.20m and Kathryn Fanshawe with the very fast “Raphaela von Berkenbroek” in the 1.10m.

Tuesday kicks off another week with the Young Horse classes here at the Tour which will be followed by a CSI3*. All in all over 2000 horses are set to compete here this week in what are one of the best equestrian installations in the world.