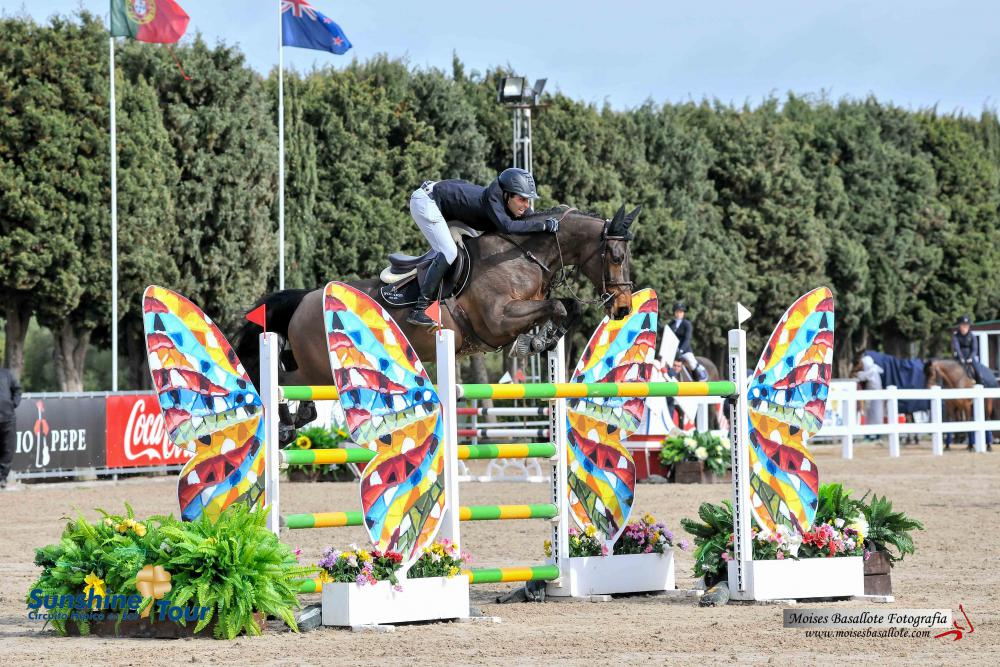 The Egyptian rider Abdel Said, was once again on winning form today, here at Dehesa Montenmedio.

Riding Beauminka (Jodokus x Carelda), he won the 3*CSI, Longines Ranking, Small GP that was kindly sponsored by Avant/Toro. With 25 combinations getting through to the jump off the class was very competitive. Abdel’s time was 33.49sec and this proved unbeatable. Harry Charles (GBR) came closest riding Vivaldi Du Dom in 35.04sec and keeping it in the family, his sister, Sienna Charles on Chaitanya 2 took third place in 35.50sec. William Funnel (GBR) with his homebred, Billy Angelo was fourth in 35.76sec and the Belgian rider Karel Cox on Dublin Van Overis was fifth in 35.94sec.

Holly Smith was again in the rosettes in the Big Tour A2, winning the class in fine style on April IV. Second and third were also taken by British riders, Jodie Hall Mcateer on Colette and Georgina Crumley on Haifa O.L. The Morrocan rider Amin Lyazidi on Medena was fourth and another Brit took fifth, Jordan Gann on Lakeland Dancer

There was another Moroccan success in the Big Tour A1. Mohamed Al Ahrach on Corinne had the fastest time; beating the Argentinian rider Richard Kierkegaard on Airflow Z in to second place. Third was Mariano Martínez (ESP) on Kavallo S, fourth was Nicolás Toro (COL) on Diamond Of Minka and in fifth was Ben Walker (GBR) on Kimba Classic.

There was a British victory from Abbe Burchmore-Eames and Casti Aneira in the Medium Tour B. Second was the Spanish rider José Antonio García on Griselda Z. Third was Carron Nicol (GBR) on Finnegan D; fourth Faye Adams (GBR) on Jackpot VI and fifth was Salvador Astolfi Pérez De Guzmán (ESP) on Condor.

The Spanish rider Olallo Larios was the winner of the Medium Tour A, riding Edelweis. In second place, the Columbian rider Nicolás Chaustre on Keve; in third was Dutch rider Pascal Uytendaal on De Uno. The Swedish rider Roine Carlsson took both fourth and fifth places riding Ixenel and Don Juan’S Gasaya.

The Small Tour C winner was the Brazilian rider Giovanna Sobania riding XK Atomo Clasi. The rest of the leaderboard was taken up with British riders. Second was Kayleigh Watts on Unex Clintan MB; in third was Hollie Pearce on Delina II; fourth was Andrew Davies on Denver V and in fifth Johanna Buckley on Celeste Of Sandbrook.

Small Tour B was won by the British rider Kerry Grimster on Boombastic with the fastest round for the second day in a row.

The Small Tour A was won by another British rider with over 5sec in hand; this time it was Hollie Pearce on Ryan’s Hollie.

Tomorrow there is a busy day of jumping planned with eleven classes in all. The highlight of the week will be the Tío Pepe sponsored, Big Tour D GP, which will start at 15:00.

The top 70 riders from this week of the Tour will compete over this 1.50m course designed by Uliano Vezzani. Another big class to come and watch, is the FEI Longines Ranking, 1.45m Big Tour C.