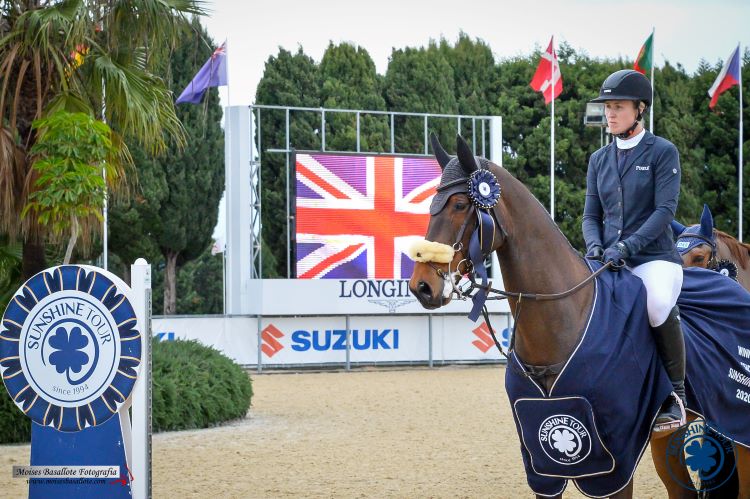 Holly Smith was absolutely delighted with her wonderful gelding Denver as they won the very hotly contested 1.50m Grand Prix, Tokyo Olympic Qualifier that finished off the Autumn Tour today.  There were 18 horses through to the jump off  today, highlighting the sheer quality of riders and horses in the class.  The first round was very technical with interesting turns and distances throughout and proved to be challenging.  Of the 18 combinations jumping clear in the first round today, 5 were Irish, this really goes to show the pure class of the Irish showjumpers at this moment.

The jump-off track was real challenge from the very first jump as the course twisted and turned with difficult lines and pace changes needed throughout.  With great support from the other riders and team members, Holly and Denver attacked the course from the word go and flew through the finish in 36.76s.  This took the lead and gave her the magnificent win pushing David Will from Germany down into second place.  David had ridden a stylishly fast round on C Vier 2 but stopped the clock in 37.00s just behind Holly’s winning time.  In the end, Irish riders took third, fourth, sixth and seventh places.  Denis Lynch with Cristelo was in the lead for a while and ended up in third place beating Mark Mc Auley with Jasco VD Bisschop into fourth.  French rider Olivier Robert slotted in to fifth place with Vivaldi des Meneaux and in sixth was Cameron Hanley with ESI Toulouse and seventh was  Conor Swail with Koss Van Heiste.

In a quick impromptu interview before the prize giving, Holly told us how happy she was to have won the class after what has been an extremely challenging year, she is looking forward to the Tokyo Olympics next year but is mainly focussing on keeping her horses happy and healthy with the help of her team and sponsors.  When asked if she will be back in the spring for the 2021 Sunshine Tour here in Dehesa Montenmedio, the answer was a resounding yes.

In the CSIO3* 1.45m Longines Ranking class today, there was a superb Belgium victory for Gudrun Patteet with the amazingly fast Sea Coast Kashmira Z. In second place the Irish were once again on the podium with Conor Swail this time riding GK Coco Chanel and in third was the well known Dutch rider, Leopold Van Asten con VDL Groep Miss Untouchable.

In the CSI2* 1.45m Longines Ranking class, there was a German win from Guido Klatte with Qinghai.  French rider Philippe Rozier with Prestigio LS La Silla was second and in third was the Dutch rider who has had great results here at the Autumn Tour, Bart Bles riding Expert.

The results of the other CSIO3* were as follows:  the 1.40m, was won by French rider Laurent Goffinet with Absolut de Lacke; second was British rider, Matthew Sampson with Chacco Boy and third the Spanish rider, Jesús Torres García with Grupo Prom Hacienda.

In the 1.35m class there was a win for Brazil from Bernardo Cardoso de Resende Alves with Matisse de Mariposa; second was the French rider Juliette Faligot with Chanel de la Ronelle and third was Mohamed Talaat with Tabea 20.

The rest of the results for the CSI2* were as follows:  in the 1.35m, Laurent Goffinet had his second win this time with Classico Des Parts.  In second place was Dutch rider, Henk Van de Pol with Cash Sent and third was the Brazilian riderJoao Víctor Castro with Helga.

In the 1.30m class there was a win for Germany from Elena Appendino with Iceman, second was the Dutch rider Kim Emmen with the ever successful, Lady Angeles, third was the Spanish rider Castora Ortiz Agüera with Colour of Love.

The 1.20m class was won by Anastasia Nielsen with Donald de Bacon from Monaco,  Hugo Kogelnig with Vermont 2 from Finland was second and third was Jose Bono with Nokito VD Weretherbach Z from Spain.

The 1.10m was won by British rider Rosie Gunn with Jagerbomb; second was the German rider Natalia Appendino with Millfield Cliche and third was Kristina Vitek this time riding Lamborghini.

The posponed 5yr old class was held today and was won by Sanne Thijssen from the Netherlands with the mare Kyra-Rosa by Cidane from a Damiro mare.  Second was Cameron Hanley with Didi Z who is by De Flor and third was Spanish rider  Enrique Camiruaga Rueda with Kasper One.

These results bring the Autumn Tour to an end here and this last week was an exciting end to the six weeks of jumping at Montenmedio.  With plenty of competitors of top international standard this Tour has been a resounding success and we hope that everyone has enjoyed the experience despite the strict health restrictions that have been enforced.  With a total pot of prize money of 800.000 euros, 17 Ranking classes and 10 Olympic Qualifiers for Tokyo 2021 there was certainly plenty going on.  Overall around 1,000 horses took part over the six weeks with 300 riders attending, many of them well up in the world Longines Rankings.

All these facts have added together to make this a really successful new Autumn event in this very unusual year. We would like to thank you all and wish everyone a safe journey home and we hope to see you all again in the new year.