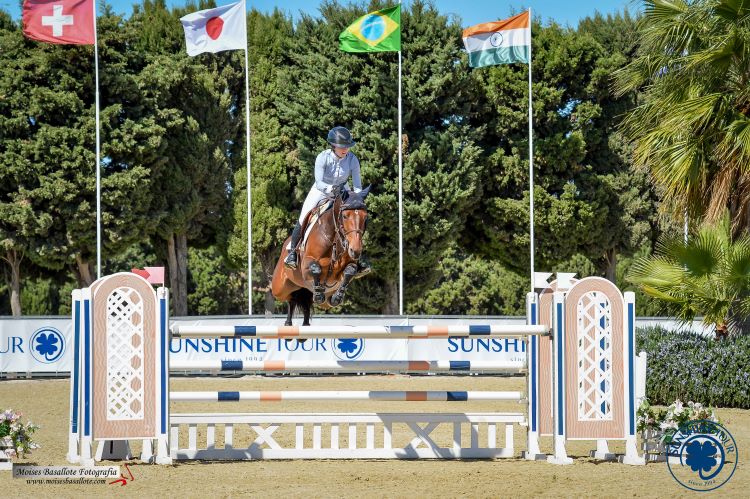 Laura Kraut from the USA with Seleste BZ was second and Matthew Sampson (GB) with Jafabalou was third, kicking off this fourth week of jumping at the Autumn Tour.

The 4th week of the Autumn Tour started up with the Young Horse classes today.  here at Montenmedio.  The 7yr old class was won by Kara Chad riding Irinka Lady who is by Etoulon and out of an Eldorado Van de Zeshoek mare, owned by Matt Sampson who was also third in this class.  Kara won the class in a very fast time of 35.56sec, over a second faster than Laura Kraut with the lovely Seleste B Z who is owned by VOF HX Horses and is by Spartacus TN from a mare by Chardonnay Z.   In third place was Matthew Sampson with the very consistent Jafabalou by Balou du Rouet, dam sire Concorde Keur, owned by Rachael Evison.  This pair are no strangers to the podium here at the Tour.

Tomorrow the CSIYH* continues and the new CSI3* begins with a new chief course designer, Gregory Bodo from France, who will be building all the classes held in the main grass arena, named after David Broome.

Please remember that due to strict sanitary and health restrictions no public access is allowed to the showground.  All action may be followed free on our livestream  options that may be accessed through our website, www.sunshinetour.net, or through the Sunshine Tour mobile App.  The App allows you to see the classes live, the list of competitors and class times, all results and even the course design and jump off course where applicable.  Videos of each horse’s rounds are also freely available.