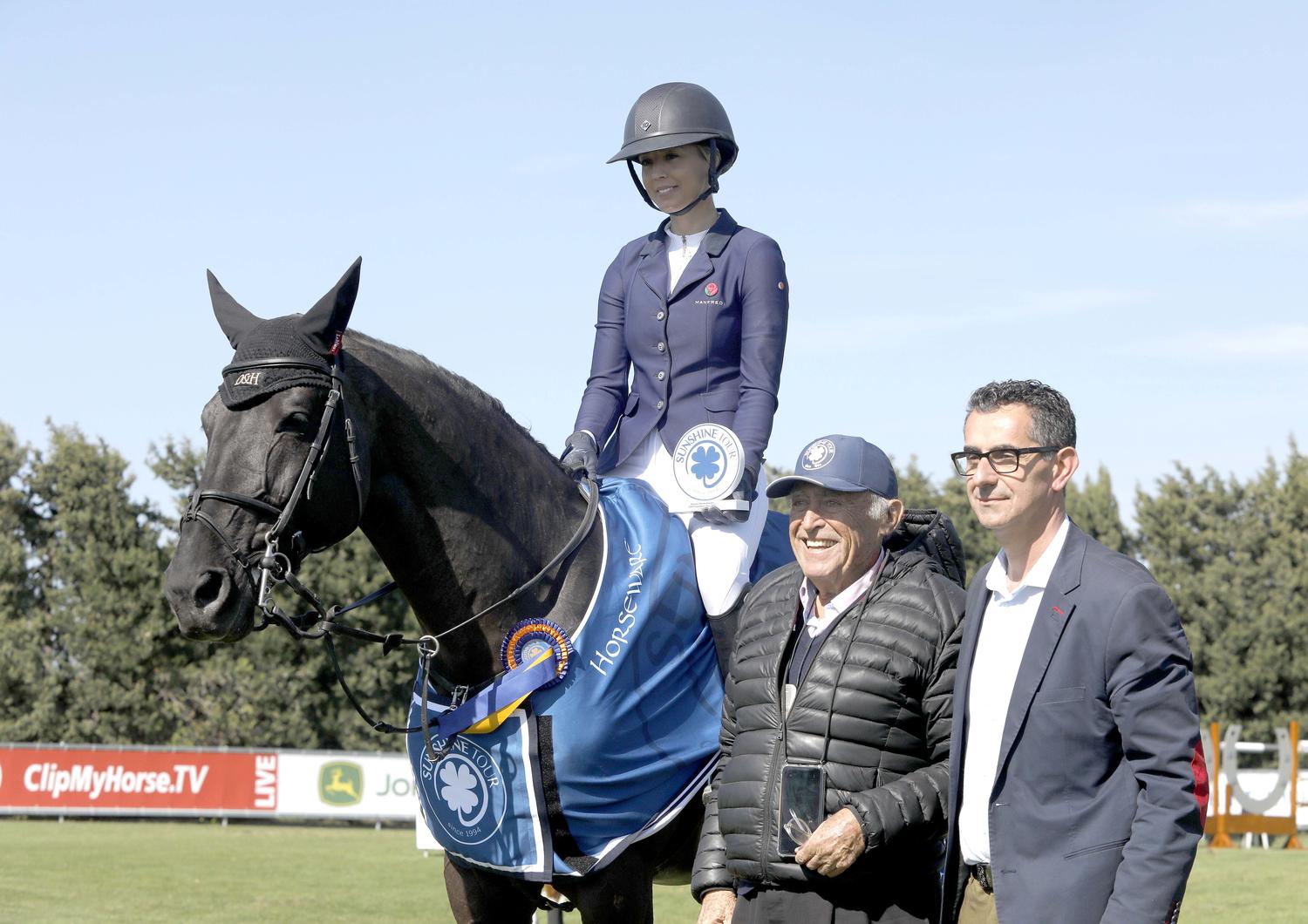 Today was the fourth Longines Ranking, FEI, class here at the Sunshine Tour. The 1.45m, Small Grand Prix was held in the grass arena, “Hickstead” and was sponsored by the Ayuntamiento de Barbate. There were 79 entries and 15 went through to the jump off competing for a share of the €25.400 prize money.

Ellen Whitaker (4th in the Houseware GP class last Sunday), went later on in the jump off and literally flew in to the lead on her beautiful, 11yr old, black stallion “Arena UK Winston”. Matthew Sampson went after Ellen but he just could not catch her and took a well deserved second place in the class with less than half a second difference in time.

Matthew has had brilliant start to the Tour, practically qualifying in every class possible so far. He told us “This is a fantastic competition for me, I have some very good horses this year that I have trained over the years here at the Sunshine Tour and now they are ready to compete in the big classes. “Cristo Beech”, who was second today, has been with me since he was five, won the 7yr old final here in 2017. I’m very proud of him he has only jumped a few classes at this height and he was also second yesterday in the Gran Prix qualifying class for Sunday, I’m delighted with him”.Tomorrow Matthew plans to “ride “Geneva R” in the Diputación de Cádiz Grand Prix. The mare was second in the Big Tour D class on Thursday and I hope she will go well. “Geneve R” is a 9yr old KWPN, I have had her a few years and the truth is she seems on excellent form so I hope that we will have a good result tomorrow.”

Carolina Aresu García Obregón was the best placed Spanish rider but did not get in to the jump off as, like many others, she had one fault for time in the first round of the class.

The rest of the Big Tour classes also had extremely tight times resulting in a lot of riders with faults. In the 1.40m class Marcelo Chirico Ferreira from Uruguay had no such issues and with “Acrobat van T Laar Z”, they won the class in 61.33s beating off 99 other competitors. The 1.35m the winner was another British rider, Robert Murphy, riding “Elan” . The Portuguese rider Tiago Morais took second and another Brit, Jodie Hall Macateer, third. The 1.30m class was won by the Moroccan rider, Rachid Belmokhtar on “Africa Capital Saona de Mescan” and second was the Spanish rider Alejandro Maldonado.

The Medium Tour, 1.35m class was won by a local rider from Seville, Jose Antonio Garcia Diana with the 12yr old mare, “Narla”, who previously competed with the famous Astolfi family. The 1.45m was sponsored by Tio Pepe and held in the David Broome arena with another British win, this time from Alison Barton riding the 9yr old “Billy Rembrandt”. In the 1.30m the German rider Kendra Claricia Brinkop took the win.

The Small Tour C had 32 entries and 6 clear rounds. The American rider Sara McCloskey won riding “Lo Visto Van’t Hulgenrode”. Juan Miguel Febrer and Kyle Bedford were the winners of the 1.15m and the 1.10m, respectively.