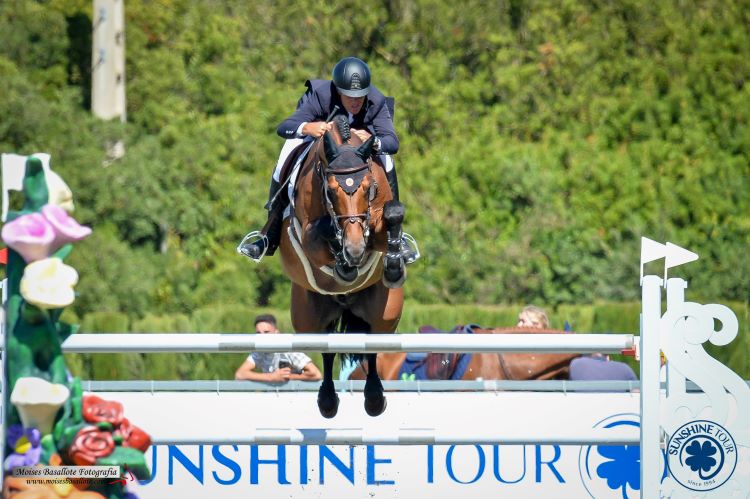 Taylor Alexander (USA) is second with Lord Lucio and Kara Chad (CAN) is third with Quidamo F in this 2021 Tokyo Olympic qualifier.

The GP for this 3rd week of the CSI3* Autumn Tour was incredibly competitive and the jump off was electric to watch.  Taylor Alexander was on track to take the top of the podium as she did yesterday, but this time she was riding Lord Lucio by Legolas dam sire, Cero.  She set a very fast time of just 39.08sec for the other competitors to chase and then, last to go, in came Brazilian rider Pedro Veniss.  Today he was riding Lord Pezi Junior, the stallion by Lord Pezi from Quattro 7 mare.  With compete focus he chased down Taylor’s time and finished in a spectacular  38.48sec giving us a Brazilian win in this Tokyo Olympic qualifier.

There was a Spanish win in the tricky 1.40m class for Eduardo Álvarez Aznar who was riding Mogambo, by Diamant de Semilly and owned by Kaliyuga S.L.  They finished their round in 55.34sec way in front of the very fast Irish rider, Tom Wachman, who they beat with a smidge over 2 seconds in hand.  Today Tom was riding M Quality who is by Diarado and owned by Coolmore Showjumping.  Another very fast Spanish rider was third, Mariano Martínez with Cleartoon.

Mariano was top of the podium in the 1.35m class with Hybalia.  The Irish rider Michael Pender was second with HHS Fast Forward and once again Kayleigh Watts (GBR) was in the rosettes with Harley taking third place in this very competitive class.

The 1.25m class was won by the British rider, Daniella Stapleton with Classic Touch V l.  Second was the Spanish rider Elena Appendino on Iceman and finally Carlos Merino (PER) was third on the lovely mare by Kannan, Ofelia Te Quiero.

The Small 1.10m class had a Spanish top three.  The winners were Mar Valdés and Cupido; second were Blanca Valdés and Just Call Me Millfield Aristoc and third were Maya Caparrós and Sea Poetico.

With these results we finish off another week here at The Autumn Tour with around 300 horses having taken to the arenas. Competition will begin again on Wednesday the 7th of October, with the Young Horse Classes.