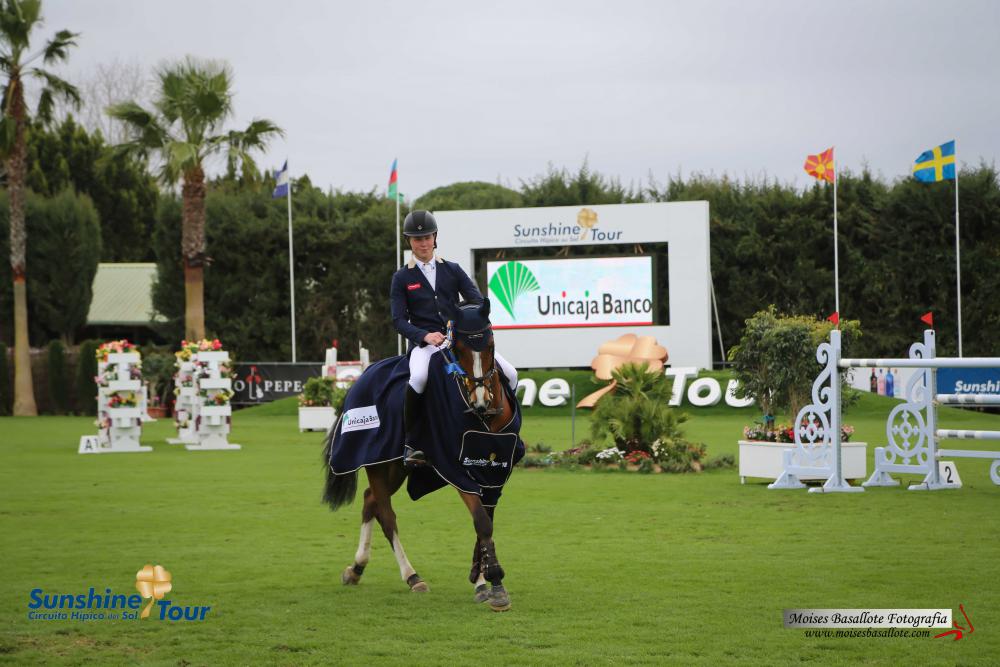 The British rider, Harry Charles took a super win in the 1.55m, Ranking GP today riding Controe. With eleven horses in the jump off, his father Peter Charles, took an early lead in a very speedy round on ABC Quantum Cruise in 33.91sec. This time proved hard to beat until the French rider Olivier Robert; and Eros came in and in a seemingly quiet round they went into the lead (for a while), in 33.51sec. After this, Harry Charles came and flew around the course taking the overall lead in 33.02sec; knocking the Frenchman into second place and his father into third. Spencer Roe (GBR) could not quite catch the top three but took a well deserved fourth place riding Wonder Why; another British rider, Graham Gillespie riding Andretti took fifth.

The Big Tour C, won by the Italian Luca Moneta on Neptune Brecourt in 56.30sec. Pedro Veniss on Anaya Ste Hermelle was second in 56.79sec. Matthew Sampson (GBR) was third with Ebolensky in 59.92sec. Irish rider, Billy Twomey and Eindhoven G. H was fourth and in fifth was German rider Helmut Schönstetter and Argentina 243. This was a 1.45m FEI, Longines Ranking class also sponsored by Unicaja Banco.

The Big Tour B was won by the Israeli combination, Elad Yaniv and Tittut. Second was the British rider Chloe Winchester on Campino 457; in third was the rider from the USA, Taylor Alexander on Casiamo.

The Big Tour A2 was won by the British rider Harriet Nuttall on Silver Lift. In second and third were Spanish riders, Jaime Gabarrón on Brioni De Vidau and Jesús Torres on Corlandollar Z.

The A1 class was won by the Columbian rider Nicolás Toro on Diamond Of Minka. Matt Sampson took second, this time riding Billy Republic. In third place was the Irish rider Paul Beecher on Asti 71.

In the other Ranking class there was also an Israeli win. The Medium Tour GP was also sponsored by Unicaja Banco. Dan Kremer won the class in a very competitive jump off against 10 other riders on the very successful horse E-Contefino-A.C. Their time, of 39.95sec, proved unbeatable, although the Columbian, Mark Bluman was close on his heels on Diamond Z in 40.38sec and took second place. Just behind, and in third place, was the German combination Jule Lüneburg on Sternenbanner in 40.49sec. In fourth was the Belgian rider Marie Dive on Christmass 2, in 41.18sec and in fifth was the British rider Eleanor Hall Mcateer on Crisanta in 41.49sec.

Jodie Hall Mcateer took the win in the 1.30m, Medium Tour A, this time riding Colette. In second was the Dutch rider, Doron Kuipers on Zucces and in third was the Spanish rider Jacobo Ussia de Garay on Vicomte De La Cour.

It was a British whitewash in the Small Tour classes as the winners of the three sections were Georgina Crumley on Haifa O.L (C), Victoria Bennet on Raphoe Ella (B) and for the seventh time in the A class, Rachael Evison on Scylla D’Ouilly.

Competition continues tomorrow with the Young Horse classes here at Montenmedio. This week many combinations will be aiming to add a final clear or two towards qualifying for the finals on the 21st of March.