Holly Smith holds on to her top spot with another win in the CSI3*, Caser Seguros Grand Prix 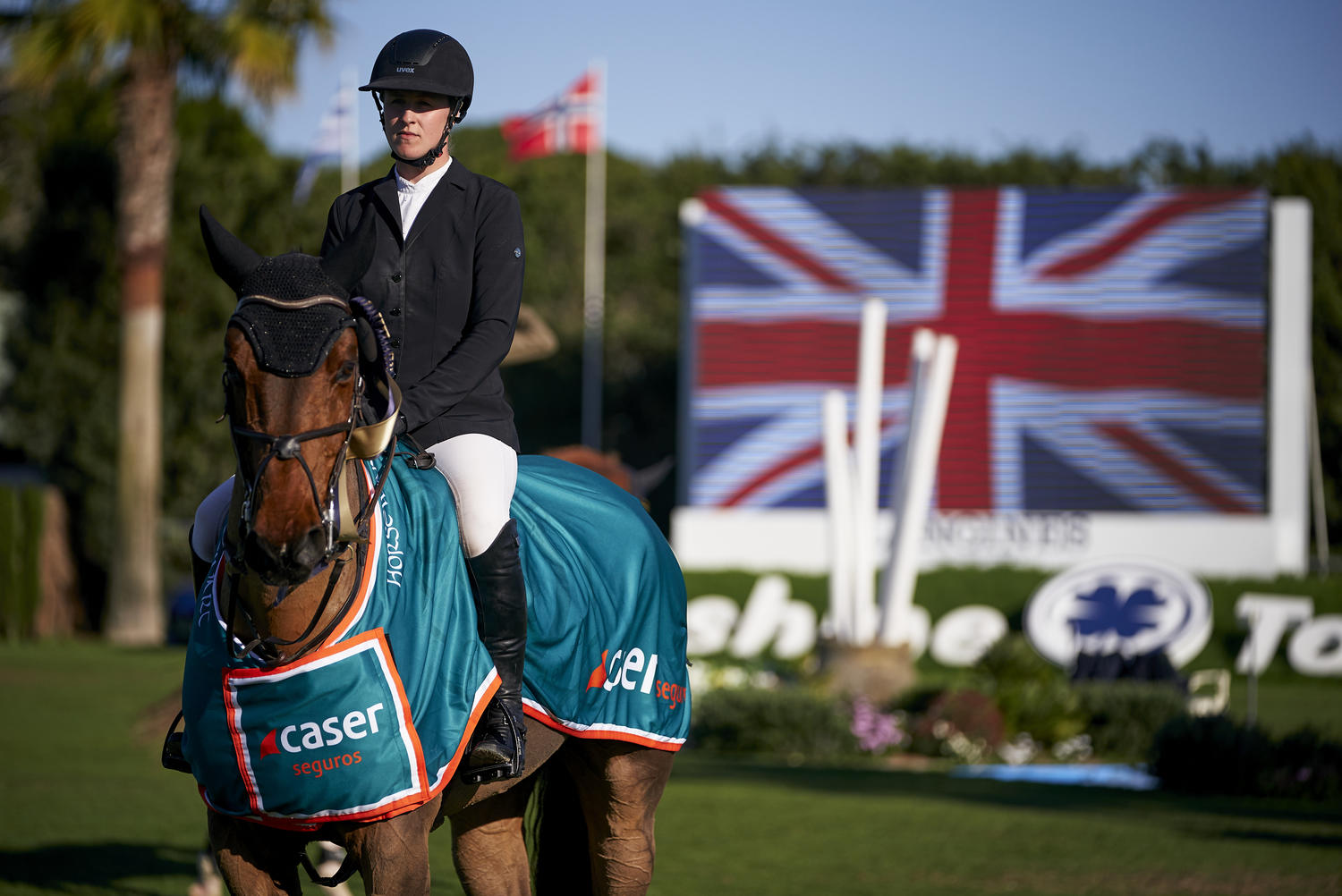 The jump off just kept getting better and better and had the crowd on the edge of their seats cheering.This demanding class was sponsored by Caser Seguros and a good number of competitors got though to the jump off which was a long one that demanded forward riding. After her round Holly told us; “there were 15 of us through to the jump off, that’s enough! This type of course is great, not too short and complicated, you don’t have to set up the horses too much for each jump.”

Everyone knew that the fast Irish rider Anthony Condom and “Sfs Vincomte” had raised the game after their round. He beat the previous leader, the Belgian rider, Bart Clarys, by a few 100ths of a second. But the crowd were aware that the last riders to go were all fast and talented. The stage was set for a brilliant final three battling it out. Alberto Zorzi from Italy on “Vauban du Trio” rode a very fast, neat round with great tight turns and took the lead away from the Irish rider by more than a second.

Then in came Pedro Veniss representing Brazil, and riding a new horse in his string, “Boeackmanns Lord Pezi Junior”; “a horse I have been riding since January and who I did very well with in the first weeks of the Sunshine Tour, coming third in the GP CSI3*”. No-one was sure if Pedro would go for the win on this 11yr old horse, previously ridden by Marcos Kutscher from Germany. However Pedro flew around the course in great style, leaving a very difficult job for Holly Smith in order to pull off a win.

Pedro told us; “the course designer, Elena Boix, did a good job today, it was a technical first round and the jump off course was also good.” From start to the finish “Boeackmanns” went at full speed in a balanced extended pace with great turns. They reaped a great reward taking two seconds off of the previous  winning time. The crowd went wild and then in rode Holly.

Holly Smith is a British rider who is shortlisted to jump at the Tokyo Olympics later this year. She regularly competes at the Sunshine Tour and is often on top of the podium. Yesterday she won the Small GP, John Deere Trophy, just shortly after arriving here at Montenmedio. Holly likes to win and she knows how. She told us “I think I got my advantage over Pedro between the first to the second jump which he did in 8 strides but the way I angled it allowed me to take one out.” Her time of 39.25sec was fast enough to take the top spot on the podium with the wonderful“Hearts Destiny” who really knows how to win a jump off at this level of competition. “Last year we won the CSI4* Suzuki Grand Prix and well, I have two fantastic horses here this year to ride in the GP. “Hearts Destiny" is a wonderful horse with a great stride and a lot of quality.” The crowd were amazing today, there was a lot of cheering and applause for all of the top 5 riders during the prize-giving and during the lap of honour.

The 1.45m Big Tour was held this morning in the grass Hickstead arena. In the end Dermott Lennon was triumphant and Matthew Sampson took second place, in third was Michel Robert, all very well known names on the podium here at Montenmedio.

Once again the 19yr old Irish rider Jason Foley was in the prize money in this fourth week of the Tour. In theMedium Tour GP which was up to height at 1.45m, he beat off 12 other competitors in the jump off riding “Madorada DW”; “she is just 8yrs old and has a great future ahead of her, I hope that next year she will become my top ride. Last season she improved a lot and now we know each other pretty well as I have been riding her since she was 5. I have to say she is very careful and powerful even though she has no experience at this height. This is a great result for her and for her owners Matteo Pelmglio and Gerard O’Neil.”

In this class the Spanish rider Sira Martínez, who is the daughter of the Spanish football team trainer, Luis Enrique, was third on “Hanna van het Lambroeck”.

The 1.35m, Small Tour C, was also won by Jason Foley this time with“Castlefield Sapphire” “a horse that is improving step by step and who is fast and careful.” In second was Tom Watchman with “ Ava Vernon”.

There was a Spanish win in the Medium Tour 1.35m, from Iván Serrano who lives in Cantabria, riding “Velcom”. They have had good results all week and have built up to this win today. Iván also came third in the Big Tour 1.30m, class, riding “Numerus”. He was beaten by Rodrigo Sampaio and the Dutch rider Kim Emmen.

So the CSYH* and the CSI3* finished off the week here at the Sunshine Tour. More than 1,900 are stabled here in these amazing installations that can boast to be utterly unique as they are the in the only sports facilities in Spain with the organic certification seal, issued by the certification body that specialises in organic production, the CAAE.

You can rewatch the thrilling Caser Seguros GP jump off on Teledeporte during the coming week and on many other international media outlets.