Its a Double Dutch Victory with Henk Van de Pol and Looyman Z winning the 1.45m Big Tour Class and B 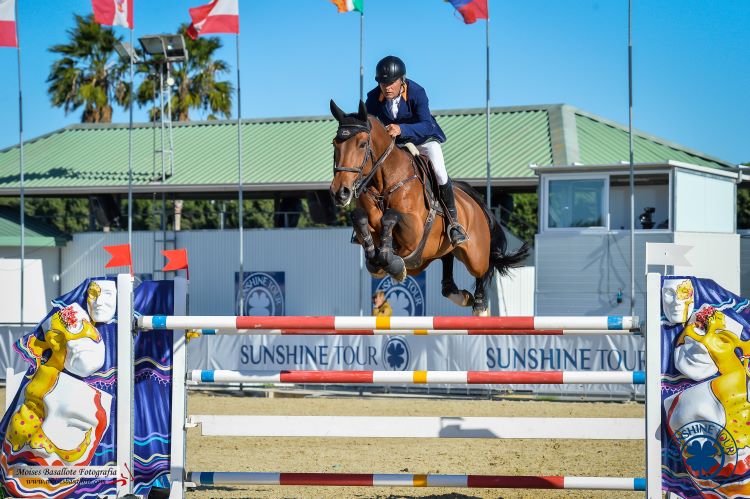 In the 1.45m another Dutch rider, Sanne Thijssen with Con Quidam RB was second with the Irish taking third place by the hand of Michael Pender with HHS Burnchurch.

It was another very busy day of jumping here at the Autumn Tour, Dehesa Montenmedio with more than 500 competitors enjoying the sunny weather as they competed across the 9 classes throughout the day.

The Netherlands claimed both top spots in the 1.45m Rankings class today, with the winner being a regular rider here at the Tour, Henk Van de Pol on the very consistent and talented gelding, Looyman Z (Numero Uno x Wellington).  Beating off nearly 100 other top combinations in the class, this pair stopped the clock in just 58.52sec exactly one second faster than their compatriot Sanne Thijssen, who took second place with Con Quidam RB (Quinar x Cardino).  Michael Pender from Ireland was third with HHS Burnchurch (Heritage Fortunus x Cavalier Royale) in 60.44sec.

The top combinations in this class have now qualified for their place in the most prestigious class of this 5th week of the Autumn Tour, the Big Grand Prix class tomorrow.  These will join the top 30 combinations from the Big Tour 1.45m class yesterday.  There are also two pre-classified riders the Swedish rider Peder Fredricson, the most important rider in the competition who took Silver in the Rio Olympics 2016 and lies in 4th place in the Longines FEI Rankings and also the Brazilian rider, Marlon Modolo Zanotelli, who won individual gold in the Lima, Pan American games of 2019 and also sits in 15th place in the Ranking.

The second Dutch win today came in the second biggest class the 1.40m, from Bert Bles with Expert. This was a jump off class and his time of 27.96sec left the other competitors standing.  In second place with 29.16sec was Maximilian Lill from Germany riding Caprice 531 and in third was Italian rider, Luca Moneta with Chilli 41.

Michael Pender continued his success with another of his well known horses HHS Fortune winning in the 1.35m class and this time Bart Bles had to make do with second place on Haloubet Hitchcock. French rider Laurent Goffinet with Valkyrie Condeenne took third place.

In the 1.30m class Kayleigh Watts, the British rider who is a regular favourite here at the Tour, took both first and third place with Ebriolita and Harley resp’. Slipping into second place was another Italian rider, Camilla Vittadini with Zallina Floreval.

Another British rider that has been successful here during this Autumn Tour is Rosie Gunn and today she won the 1.20m class with Jagerbomb. The Swedish rider Fredrik Jönsson was second with Bambi Blue and third was the Czech rider, Kristina Vitek with Kamirez Van Orchid’s.

The 1.10m was won by the the Monégasque rider, Anastasia Nielsen with the lovely, Donald de Bacon.  Kristina Vitek was second, this time riding Lamborghini and in third was the Finnish rider, Hugo Kogelnig with Vermont 2.

The 5yr old class was won by Guillaume Foutrier this time riding Pornic de Bornival Z who is by mthe very famous stallion Peppermill. In second place was the only Spanish rider on a podium today, Armando Trapote with the lovely mare Kristal’s Beauty B. In third place was Derin Demirsoy from Turkey with Pride of the Lowlands BH who is by Darco.

Competition continues tomorrow with ten classes including the Longines Ranking GP, a qualifier for the Tokyo Olympics 2021 and where there will be some of the very best riders and horses in the world taking part.