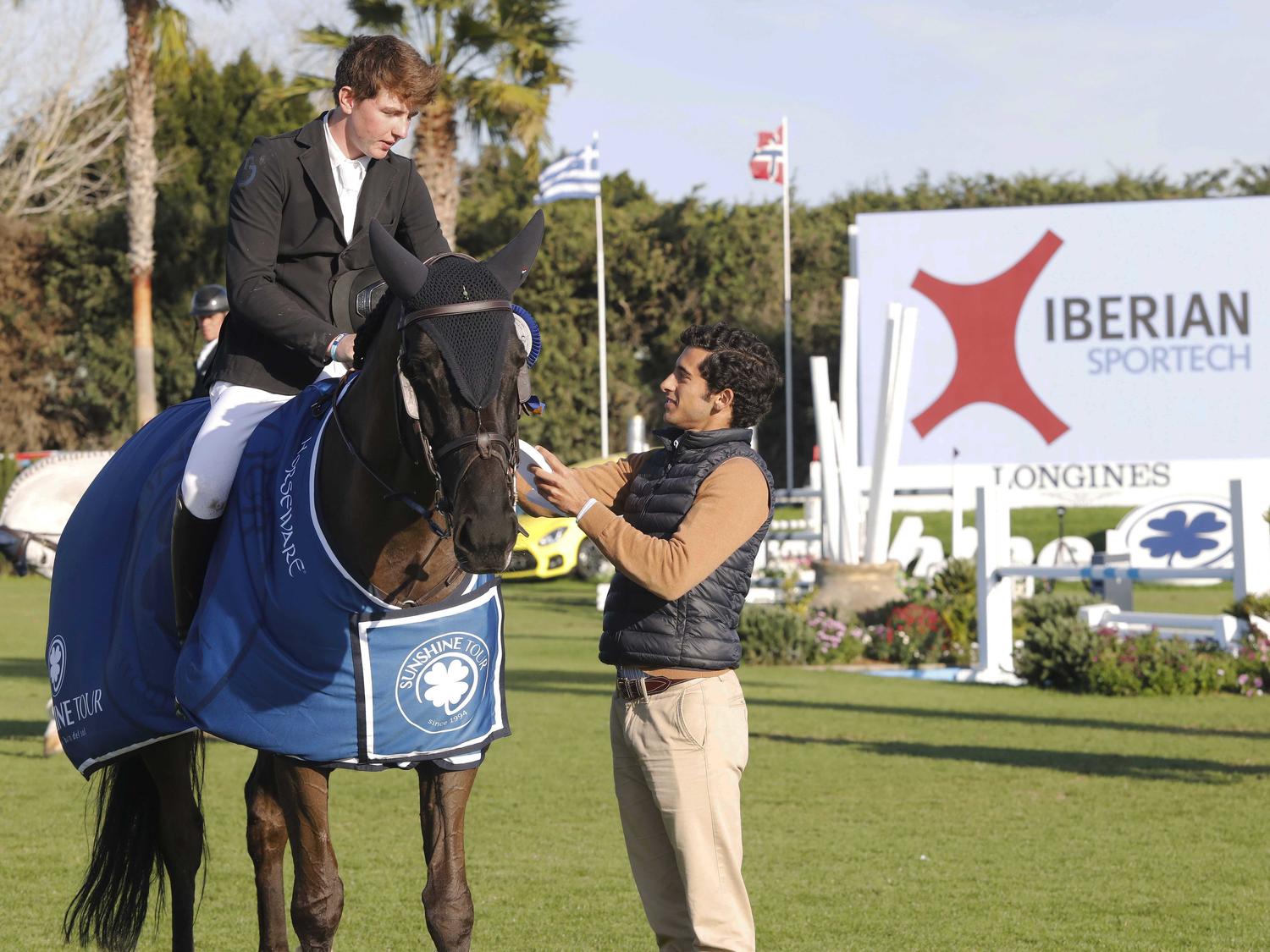 Beating off more than 85 competitors, the 19yr old Irish rider, Jason Foley, was top of the class with “Castlefield Cass”. The class was sponsored by Iberian Sportech and was the qualifier for the first Big Grand Prix, which will be held this Sunday and will be sponsored by the Diputación de Cádiz. The course was set at 1.50m and there were more than 30 clear rounds. Second place went to Dominique Hendrickx riding “Bacardi les Hauts” and third to another Irish rider, Michael G Duffy who led the field from early on, demonstrating the quality of the Irish showjumpers at the moment. Jason is proving to be a real shining light for the future of the sport and has already great form, he was part of the team that won the Bronze medal in the 2018 European Championships and he has already won numerous International and Nations Cup classes.

“It was a really difficult track today. If you wanted to win you had to do something a bit different and go full speed. But “Castelfield Cass” made it easy for me as he is naturally very fast. He jumped really well, he has a very strong character and has not competed much at this height. The Sunshine Tour is a perfect event for him to jump in the bigger classes and get some good results. I plan to jump the Sunday GP classes and I hope to qualify for the Longines Grand Prix but if I feel it is too big for the horse I will change my plans accordingly.”

The Belgian rider Dominique Hendrickx also went late in the field and took second place with “Bacardi les Hauts” pushing Michael G Duffy down to third. Michael agreed it was a difficult track, he told us “I was in the lead until the last ten riders but there you go, it was a good class. I haven’t had my horse “Flint TS” very long, its only his second International class with me. I was second with him last week here in his first one, the Houseware GP, so I am very pleased with him. My plan for the Sunshine Tour is to bring on the Young Horses so they are ready to tackle bigger classes by the end of the circuit. That’s the great thing about the Sunshine Tour, you can bring inexperienced horses here and they grow in confidence and experience for the rest of the season. I have 12 horses with me and 2 students. I will compete with 10 horses”. Michael went on to say he was very happy to be at the Sunshine Tour XXVI, with the riders being able to enjoy the great weather here. “We are having a fantastic time, I’m going to have to buy a factor 50 sun block! Us Irish are not used to this wonderful sun!”

In the 1.45m, Big Tour C class the Dutch rider Sanne Thijssen was the winner with “No Fear VD Tichelrij Z” and Matthew Sampson who has been in the top three a lot this week, took second place with “Cristo Beech”. The Turkish rider Omer Karaevli, was third with the very talented “Gotham City PL” who has also great results here at the Tour.

The local Spanish rider, Jesús Torres was the winner of the 2-phase speed class, the 1.40m, Medium Tour C. Jesús is based in Seville and was riding “Grupo Prom Hacienda”. He beat the British rider Alison Barton with “Saphir” by almost 3 seconds. Another local rider Antonio Mariñas, was third with“Diamond Loma”.

Small Tour winners were the British riders Kyle Bedford in the 1.10m with “Princess of Monaco”, Sophie Holliday in the 1.15m with “Westerhofs Limit” and finally the Italian rider Camilla Vittadini with “Zallina Floreval” in the 1.30m.