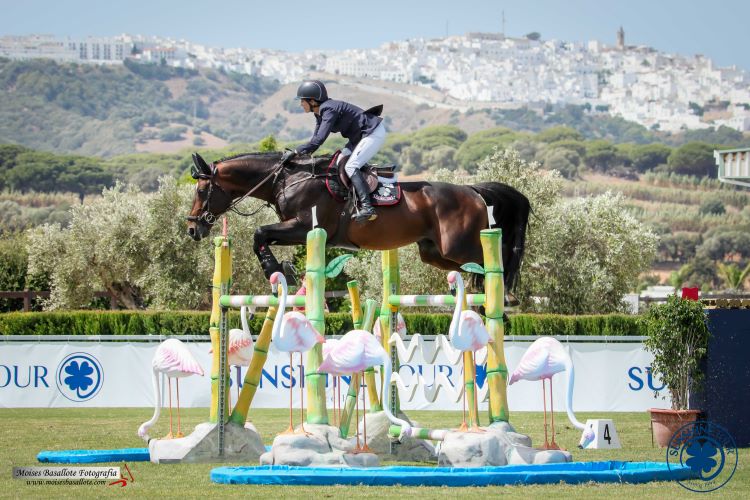 The GP class today was big, challenging and exciting to watch.  It was a fitting end to a week of professional competition here at Montenmedio in the Sunshine Tour’s  new Autumn Tour.  With the level of the riders and horses competing in this Olympic 2021 qualifier and Ranking class, it was clear the places would be hotly contested and the course designer Elena Boix Gracia, (3*) built a perfect track to show off the talents of both horses and riders.  There were 35 competitors in this 1.50m class  which was held in the David Broome, grass arena, and nine jumped clear in the first round.

The jump-off course was equally challenging with tight turn-backs and a very long gallop to the last upright fence. Laura Kraut riding the beautiful stallion Casco Bay (Quaprice Bois Margot / Flipper D’Elle), attacked the course with power and precision shaving tenths of a second off as she rode the first part of the course and jumped out of the penultimate fence, a double, turning in the air, just before the gallop to the last. The pair stopped the clock in 37.19 sec, knocking the previous leader Joao Marquilhas from Portugal, off of the top spot (37.41 sec), with his super gelding Glamour ES (Echo Vant Spieveld / Calvados) owned by Elia Construction SA.  Last to go was the Spanish rider Eduardo Álvarez Aznar with the chestnut gelding, Legend (Ogano Sitte / Nabab de Reve) whose ringcraft was a joy to watch as he slipped in to the second place spot in just 37.3 sec and knocked the Portuguese combo in to third place.

Held before the GP was the 1.40m Big Class A, where there was a Spanish victory for Mariano Martínez and Quicksilver, finishing off a great weekend of jumping after their second position yesterday.  Kara Chad from Canada continues to be on top of the podium this time in second place with Carona. Another Spanish rider Ainhoa Manero, with her mare, Bellefleur PS Z, jumped really well in this A class, after  successfully moving up from the 1.35m, Medium B class yesterday where she was also third.  Italian rider Luca Moneta was fourth and fifth with Etoile Vd Wijnhoeve Z and Chilli 41.

The other three classes today were held in the Milton surfaced arena.

The 1.35m, Medium Class B, was a 2 phase speed class and was won by the British rider Kayleigh Watts with the 10yr old mare, Kimosa Van Het Kritrahof in 23.39 sec.  In second place, Luis Sabino Gonçalves was once again successful, this time riding Adiamood de L’Abbaye in a time of 23.6 sec and in third was the German rider, Nicola Pohl with the Indoctro stallion, Be Careful.

There was another Spanish victory in the 1.25m Small Class B.  This was the second consecutive win for Fernando de los Santos with Isba Caps.  The successful Swedish rider Linda Heed with Heart to Heart came second and in third  place was Olivia Howe (GBR) riding Sue Howe’s, Black Label.

The 1.10, Small Class A was won by the Venezuelan rider Maia Velasco with Ilona Van T Palmenhof.  They beat the Swedish rider Cornelia Bordier riding I into second place whilst the Spanish rider Alberto Márquez with Futuro came third.

And that wraps up the first week here at the Autumn Tour, we hope that you have watched the live streaming and have made use of the Sunshine Tour App to see individual rounds from each horse and rider.  We kick off again on Wednesday the 16th with the same classes including the Young Horses.