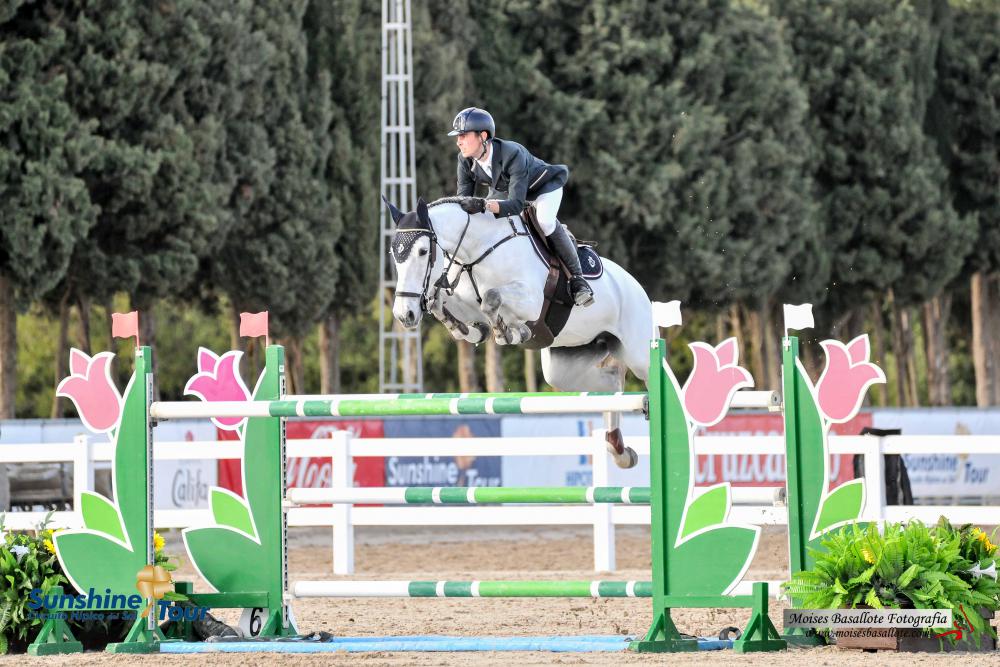 The Big Tour D, GP today was sponsored by Cruzcampo and was a Longine’s FEI Ranking class.

It was won by the German combination Marcel Marschall on Fenia van Klapscheut from 100 participants and a jump off of eight riders. Their winning time of 35.48sec was just under a second faster than the time for Abdel Said on Siec Captain Future Z, who stopped the clock in 36.28sec. British riders took third to fifth places, Ellen Whitaker on Arena Uk Winston in 37.51sec, John Whitaker on Cassinis Chaplin and Ben Walker riding Roulette.

The 1.45m, Big Tour C class proved another success for Abdel Said, this time he took the win riding Beauminka in just 34.24sec, beating the Irish combination of Gerard O’Neill on Castlefield Cass, who were over a second slower in 35.93sec. British riders took third and fourth, Holly Smith on Fruselli in 36.41sec, followed by John Whitaker this time in the rosettes, with Udget Du Rozel. In fifth was Taylor Alexander (USA) on Gipsy King.

There was a Belgian victory in the 1.40m Big Tour B class. Virginie Thonon on Kamara Du Chabus was first, British rider Guy Williams on No Name was second and the Mexican combination Gerardo Pasquel on Epicor Da Gandarinha were third. In fourth place, again in the rosettes, was Ben Walker this time riding Genius Contender. In fifth was the Irish rider, Greg Broderick on Billy Pringle.

In the 1.35m, Big Tour A2 there was a British top three. First was Max Routledge on Lord Of Arabia. Jodie Hall Mcateer on Colette was second and Chloe Winchester on Campino 457, third. The Spanish rider Jaime Gabarrón on Gabanna was fourth and British rider Matthew Sampson, on Dy Korette was fifth.

Matthew Sampson was top of the leaderboard in the 1.30m, Big Tour A1 riding Billy Republic. Another British rider took second, Jordan Gann on Lakelan Dancer. In third was the Spanish combination of Mariano Martínez and Glannox. In fourth place was British rider, David McPherson on Chariosa and in fifth the Belgian rider Pieter Kenis on Eugene Van’t Valleihof.

In the 1.40m, Medium Tour C, there was a British top three. Steven Whitaker on Billy Jean in 27.06sec was first and second was Jessica Dimmock, on Billy Blue Bell in a very close time of 27.35sec.

In third was Christopher Moorhouse on Castle Rock in 27.79sec. The Spanish rider, José Antonio García on Chaccligh was fourth, and fifth was the Belgian rider, Paul Emile Blaston on Doreak. The class was also sponsored by Cruzcampo.

The Medium Tour B was won by a regular winner here at the Sunshine Tour, the British rider Kayleigh Watts on Fashion V. In second was the Spanish rider Jacabo Ussia de Garay on Vicomte De La Cour and in third was Dutch rider Anoek Van del Pluijm on Elcapone. British rider Charlie Jones on Elpaola was fourth and fifth was the Brazilian rider Carolina Drummond on Istar Van De Meerdijk.

In the 1.30m, Medium Tour A, there was a British win with  Faye Adams on Jackpot VI. In second was local Spanish rider, Salvador Astolfi Pérez De Guzman on Condor In third was ukrainian rider Alona Soloviova on Dicasi Oh and in fourth the French rider Guy Jonqueres d’Oriola on Zallina Floreval. The Swedish rider Roine Carisson on Ixenel was fifth.

The winners of the Small Tour were all British today. In section C, Abbe-Burchmore-Eames on Casti Aneira. In B, Kerry Grimster on Boombastic and in A, Rachael Evison on Scylla D’Ouilly.

Competition continues tomorrow with ten classes and the Small GP which is a Ranking FEI class with prize money of 24,600 euros.

Two big wins for Irish rider, Denis Lynch today one with Spring Dark in the 1.50m class and the othe