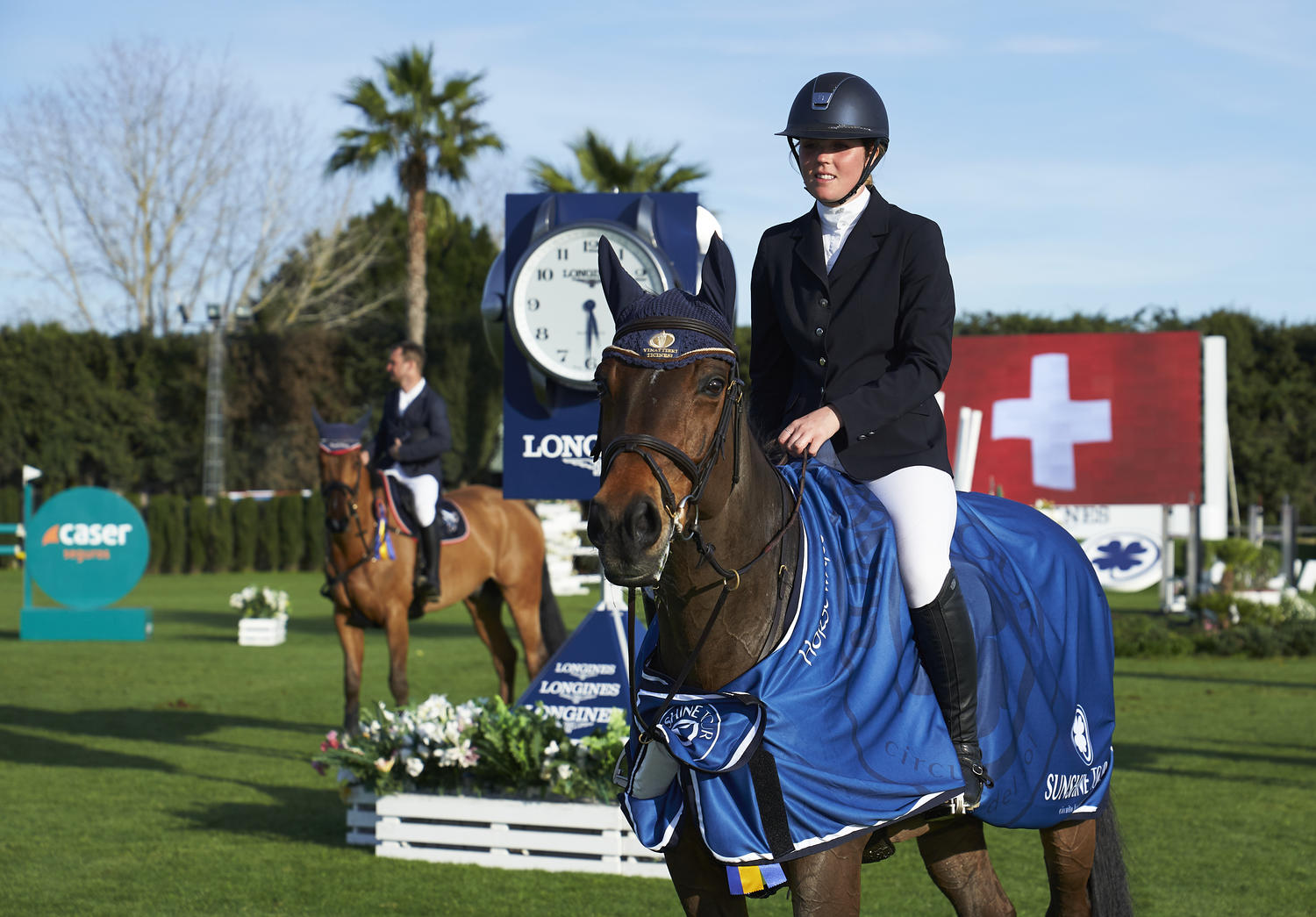 But the Brits ‘sweep the board’ with success in eight of today’s classes!

The Dutch firm that constructs and maintains top class arenas, Franz Wijlaars was the sponsor of the Big Tour class today at the Tour. The win went to the Swiss rider who was one of the few riders to make it through to the jump off in the very tight time set for a demanding course built by Spanish course builder, Marcos Nuñez. Indeed the time was the deciding factor with only 5 clear rounds going through to the jump off from 88 entries. In the end just three riders decided to participate in the jump off and the young 24yr old, Swiss rider Martina Meroni, took an impressive win.

Meroni is based with her parents and her sister Giulia in Cantón del Tesino in Switzerland where they breed and produce competition horses. This is her first visit to the Sunshine Tour, and her first time on the podium, in the very first week. She was riding “Rock de Vains”, a French bred horse today who is 15 and who she has ridden and trained since 2012.

The other two jump off competitors were the British rider Harry Charles and Czech rider Ales Opatrny. Harry is also a young rider at just 21yrs old, he has excelled here at the Tour in the past and is the son of the famous Olympic rider, Peter Charles . Harry was riding “Exexel” today and took second place and Ales riding “Forever”, finished in third over this very demanding course. Ales has already qualified for this year’s Olympic games and is clearly a rider to watch.

30 riders and 95 horses have participated so far this week in CSI2*. One of the most notable ones is the British regular here at the Tour, Kayleigh Watts. Today she really was the ‘speed queen’ first in the 1.35m with “Melvin VD Bisschop” and in the 1.20m with “Arko’s Girl Z”. However Anna Wilks and Kyle Bedford took the top spots in the 1.30m and the 1.10m resp. Kayleigh and “Melvin VD Bisschop” are a familiar team here at the Sunshine Tour and last year they had great results in the 7yr old classes.

Alice Watson is another very fast British rider and today was placed third in two classes, both the 1.35m and the 1.20m. For the second day in a row she took the top spot in the 7yr old class with “Cintrix de Ruisseau”.

The German riders Guido Klatte with “Dollhouse” and Marc Bettinger with “Citty Cat PJ”, were the winners of the 5 and 6yr old classes today and finished off a good week of jumping, for the Young Horses, here at the very sunny Tour.