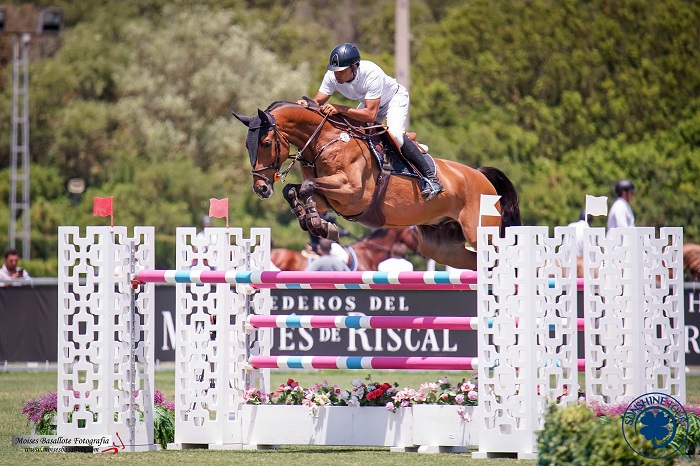 Martínez Bastida wins both of the big classes starting off the third week in fine style, here at Montenmedio.

Mariano Martínez Bastida is a very successful Spanish rider from the region of Murcia and has been a podium regular here in this Summer Tour at Montenmedio. Today he increased his winnings to the very tidy sum of, 13.870€. Once again, riding the talented and very fast CLEARTOON (X CARTHAGO), he repeated his top results winning today’s 1.45m class. Completing the hat trick he won the 1.40m, riding HYBALIA (x TYGO), putting them in the top three in this 1.40m class for the fifth time this Tour.

Javier Trenor ‘Chape’, who qualified as an FEI level 4 course designer at the end of last year, was responsible for both of these classes today. The classes were qualifiers for tomorrow’s FEI Ranking class in which each rider may compete with two horses.

The winner of the 1.30m was Alejandro Entrecanales with UGO DE PLESSIS (QUINCY x PALESTROO II) this being his second time in the top three in the Tour so far. Second was Mariano Martínez Bastida with BEKAN DE TRIVERA (x BERLIN) who jumped here for the first time today and in third was Kevin González de Zárate with GEHAZIA VDL.

There was an Italian victory in the 1.20m from Gianluca Gennusa and OTELLO DE GULDENBOOM (TOBAGO Z x CARETINO). Alejandro Entrecanales with BLUBEL DES BRIMBELLES (PARADIS LATIN x DIAMANT DE SEMILLY) was once again on the podium, this time in second. Both third and fourth places were taken by Julia Correa riding EVANE (x NUMERO UNO) and CLINTEN resp’.

Marta Macías and RAID BOY II took the top spot in the 1.10m repeating their win from the first week. Second was Sandra Gil with MARQUESA and third was Juan Miguel Febrer with GRANTENDER (GRANDINO x CONTINUE) who finally got on to the podium after being very close a few times!

The YOUNG HORSE classes for the 5 and 6yr olds were not against the clock today and there were just 5 clears in the 5yr olds and 11 in the 6yr olds.

Tomorrow the programme starts at 9:30 with the 1.35m in arena 5 and from 10:00, the 6yr old class in arena 3. This weekend we also have a new CSNP1 with qualifying points for the Spanish Championships.

Competition can be followed through or App: Sunshine Tour Mobile which is available in both para iOs y Android.