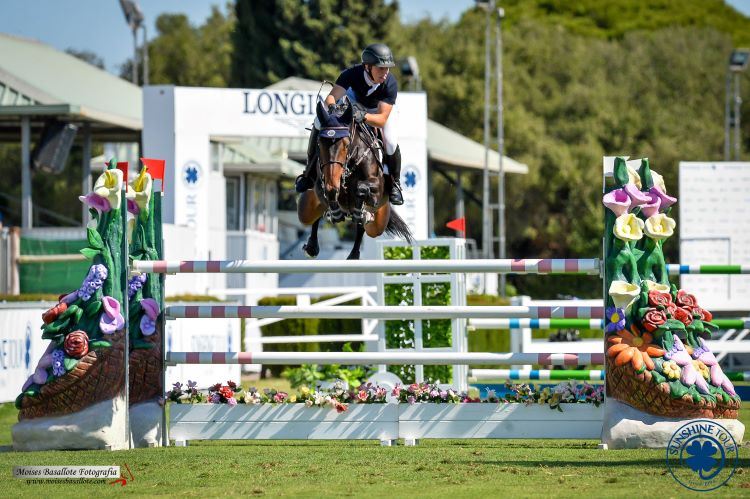 Spanish rider Mariano Martínez, takes the top two spots with Hybalia and Quicksilver in the second biggest class of the day, the Medium Tour B

The main grass ring, which is named after the legendary horseman, David Broom, was the location for the FEI, Longines Ranking class today.  At a height of 1.45m it was an impressive course.  The international rider from Great Britain, Matthew Sampson who regularly competes here at the Sunshine Tour, took on the track and won the class with Curraghgraigue Obos Flight (Obos Quality x Errigal Flight) owned by Rachael Evison.  Their time was a mere 66.93 seconds and they beat off the challenge by the German combination, David Will and Carasina HD (Carrico x San Patrignano Cass) who stopped the clock in 67.84 sec for second place.  The USA took both 3rd and 4th paces with Julie Welles and Ambra (Quintender x Grandeur) finishing in 67.99 sec, followed by Laura Kraut and Casco Bay.

The 1.35m, Medium Class B, was also held in the main arena and 5 out of the top 6 places went to Spanish riders, with only Linda Heed from Sweden breaking the trend and taking 5th place.  The star of this class was Mariano Martínez who took first place with Hybalia in 57.86 sec and beat himself into second place on Quicksilver.  Jesús Torres riding Grupo Prom Hacienda came third and Antonio Mariñas Soto was 4th.

The Medium Class A was held in the Milton arena and added to today’s British victories. Kayleigh Watts, a well known winner here at the Sunshine Tour, proved she was on form. Riding Harley (Quadrillo x Poor Boy) they flew round taking first in 58,81 sec.  In second place was the Indian rider, Maryk Sahney with Flyer B (Unaniem x Goodtimes) and once again Julie Welles took third place this time with Charming Fellow Z (Clinton x Cappucino V Verkenbroek).

There were 17 horses taking part in the 7yr old class of which ten went clear. Matthew Sampson had his second win with Jafabalou in just 31.32 sec with the Irish rider, Anthony Condon close on his heels with SFS Mirage.  In third place was the Spanish rider Armando Trapote with Messentus PS.

There were 14 combinations in the 6yr old class with 12 going clear and the 5yr old class had 11 entries with 8 achieving a clear round.

The first week of the Tour continues tomorrow with eight classes. The 6 and 7yr olds will compete on grass at 1.25 and 135m resp’. Tomorrow the 5yr olds will also jump  but on the surfaced arena, with their course being up to 1.15m.

The Big Tour Classes of 1.40 and 1.45m will be held in the main arena and are Longines Ranking classes.

The whole event is transmitted live both on our web site www.sunshinetour.net and on www.clipmyhorse.com. The Sunshine Tour App is totally free and can also be used to look at all the details of the riders, the horses, entries, class schedules and the results. You may also watch videos of each rider’s rounds.