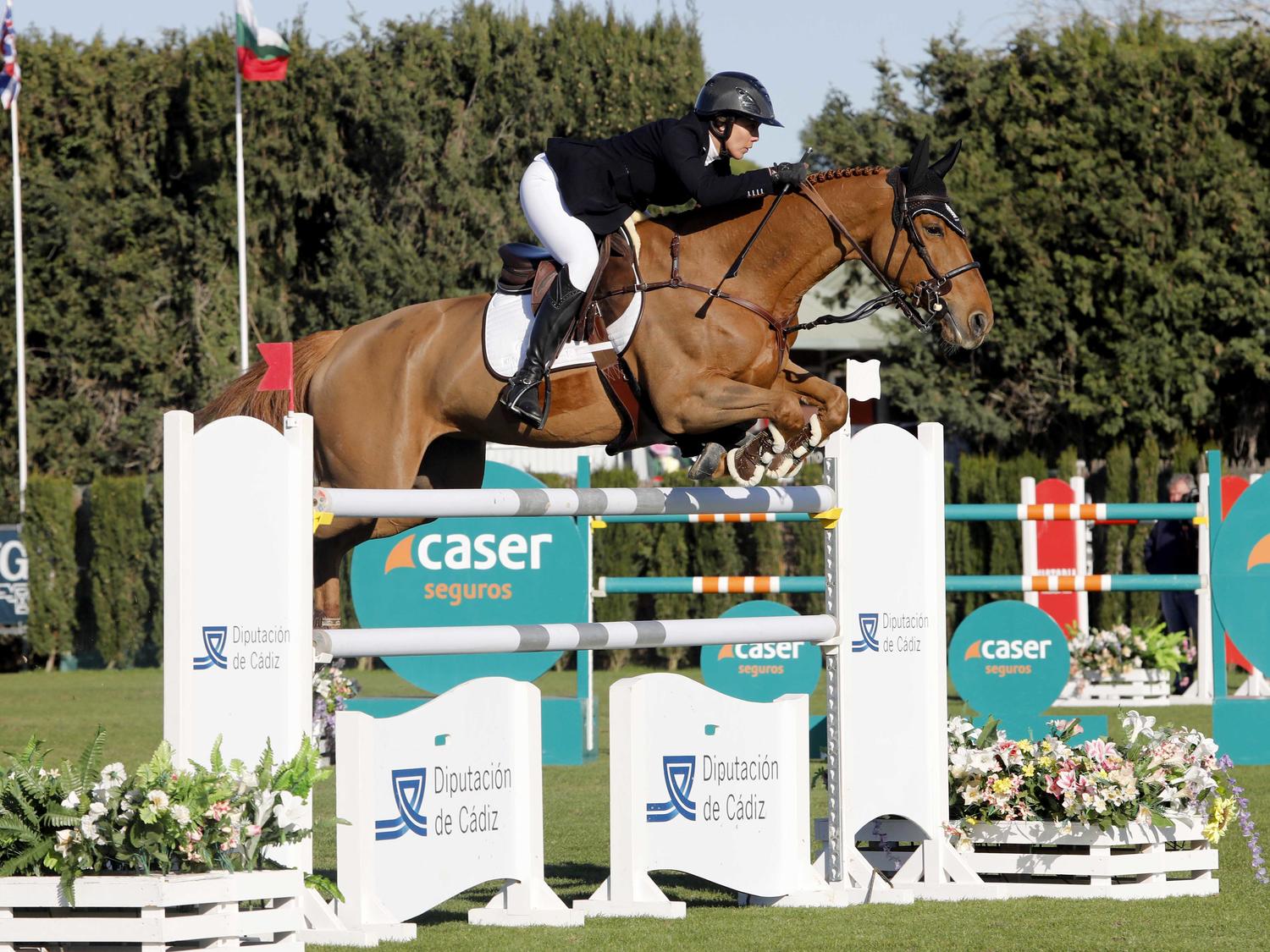 It was a close run duel between two top lady riders in the jump off with €51.100 overall in prize money

There was a great atmosphere in the stands today as the Grand Prix class kicked off. With a large number of top riders competing, such as Roger Yves Bost, Gudrun Pattet, Laura Kraut, Alberto Zorzi, Harry Charles and the 72 year old, Michel Robert, it was clear this would be a hotly contested class.

16 riders went through to the jump-off in a course designed by Louis Koninckx. The Belgian rider with “Sea Cost Kashmira Z” took the lead from Kayleigh Watts, the very successful British rider, by a mere hair’s breadth. This was the second GP class that Gudrun has won here at the XXVI Sunshine Tour and it was very clear from the start that she went out to win.

For a while it really appeared that no one could catch Kayleigh, her time of 33,94sec was so fast. Many riders tried but by riding that fast their luck failed them and they clipped a pole. Most notable was Matthew Sampson, with the fabulous mare “Geneve R” who had the last down. The “Ashford Farm” rider Joseph Clayton with “Like a Diamond Van Het Schaeck” rode a brilliant clear and put another Brit in to the top three. From the moment Gudrun entered the arena, all eyes were on her. The round was flawless and she slid in to lead by a mere 0.02 of a second!

“I am so proud of my mare it was fantastic. I didn’t manage to see Kayleigh go but they told me that she had ridden very fast and I knew I had to go all out if I wanted to beat her. I stayed calm in the first line as I didn’t want to surprise the mare too early on but then I risked it and went as fast as possible at full pelt!

This 1.50m Grand Prix class was sponsored by the Diputación de Cádiz. The audience was full and graced by many of the best riders and equestrian names in the world. Sitting in the stands and the VIP area we noticed such names as Jan Tops, Nick Skelton, Ludo Philippaerts, Gilbert de Roock, Jos lansink and Peter Charles.

Kayleigh, has had an amazing week at the Tour and this was the icing on the cake,  taking second place in the CSI3* with “Ninkie de VY Z”. She told us; “I didn’t think I would get this result today, I really didn’t! Ninkie jumped amazingly, there were a lot of clears in the first round so coming second is amazing. The jump off went really well for us and she always gives her all in the ring, so I was really confident in taking the risk, riding fast and going all out to be competitive. I am really lucky to be able to compete here.

The 1.45m, Medium Tour GP sponsored by the Ayuntamiento de Vejer, was won by the Irish rider Jennifer Kuehnle with the 10yr old “Arlo de Blondel”, beating the British rider Max Routledge in to second place and the Swiss rider Martina Meroni took third. Martina was also second behind another Brit, Jessica Hewitt and “Hot Bluebird”.

The Medium Tour A, 1.30m class was won by the very successful Portuguese rider Marina Frutuoso who is well known here at the Tour. Riding her gelding “Cantano” who was also second in the 1.35m class on Friday, where she beat herself with her other horse, “Chassana”. Overall a great week for her. The Spanish rider Irene Horvath was second in this class, having returned to competition last season she has already had great success including winning the Silver Medal in the Campeonato de España that was in December.

The Small Tour winners were Kristina Klevanova, Aude Bagattin and Kyle Bedfortin in the 1.35m, 1.20m and 1.10m classes (resp).

This was a great weekend of jumping with around 1,400 horses competing in the arenas. There are so many horses here at the Tour in this second week of the  competition the number of chippings ordered has been doubled after more than 12.000 bales were sold in just 15 days!