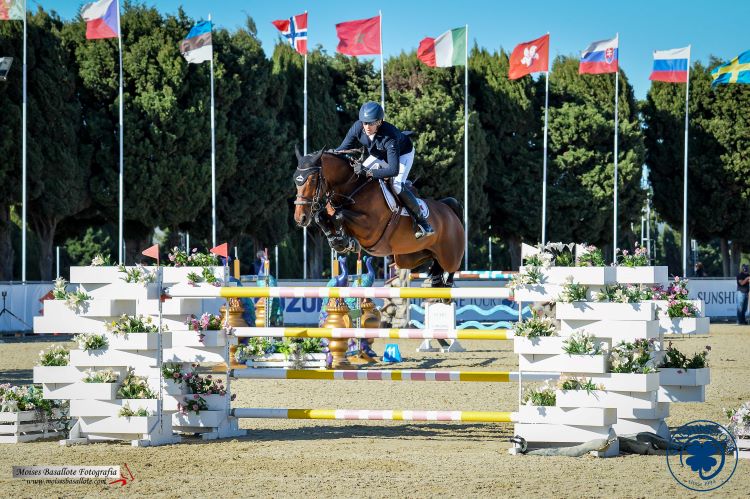 The Dutch rider Kim Emmen with Jack Van Het Dennehof was second and in third was the French rider Olivier Robert with Vivaldi des Meneaux in this 1.50m Olympic Qualifier.

The winning horse in today’s Tokyo 2021 Olympic qualifier, was Little Magic D’Asschaut, a 9yr old gelding owned by Camp PB B.V. by Back Gammon, dam sire Nonstop.  Ridden by the internationally successful Henrik Von Eckermann, from Sweden who is ranked number 17 in the FEI World Rankings, the pair flew around the jump off course with style stopping the clock in 40.43sec.  The class was a fitting end to this, the fifth week of the Autumn Tour, and was clearly an Olympic qualifier in all senses. Henrik showed his experience riding the track with great style and confidence as befits a rider of his standing. Henrik is one of the highest ranked riders here at the Tour and his record speaks for itself; he has represented Sweden in both the Rio de Janeiro and London Olympics in 2016 and 2012 and also won a team silver medal in the WEG in Tryon in 2018.

The class had 60 competitors who had qualified over the last two days here at the Autumn Tour or who were preselected on their sporting merit. Only eight horses got through to the jump off in this demanding 1.50m class with many roll back fences, a tricky treble and a very big spread to an upright as penultimate and ultimate fences.

The jump off course started off with a roll back and a windy s shaped section including the b and c sections of the treble from the first round. It ended in a long gallop to a big upright, requiring horses with great agility and maneuverability and of course, scope.

Fourth place went to Ireland with Conor Swail and GK Coco Chanel, fifth was another French rider, Laurent Goffinet with Atome des Etisses both also jumped clear in both rounds.

Across the course of the day there were also nine other classes with the Dutch rider Jur Vrieling and El Rocco wining the second biggest class of the day, the 1.45m.  In second place was successful British rider Laura Renwick with Top Dollar VI, who was also second in last week’s 1.40m class on Saturday.  Irish rider Mark Mc Auley with Engerupgaards Cezanne took third place.

Another rider from the Uk who has been in the rosettes during this Autumn Tour is Matthew Sampson, and today he was the winner of the 1.40m class with the lovely  Chacco Boy. Tim Wilks who rides for Canada, took second place with Melvin VD Bisschop and in third place was Kim Emmen who really had a great days jumping today, once again on the podium, this time with Warriors Glory.

There was a Spanish win in the 1.35m class for Mariano Martínez Bastida with Hybalia.  Second was Polish rider, Andrzej Oplatek with Odile du Soufflet and third was the Egyptian rider, Mohamed Talaat with Tabea 20.

The 1.30m class was won by Dutch rider, Henk Van de Pol with the very consistent Forlan and second was the Italian rider, Camilla Vittadini with Zallina Floreval.  Third was another Spanish rider, Javier González Fraga with Carmucha.

The 1.25m was won by the Czech rider Kristina Vitek with Kamirez Van Orchid’s,  Javier González Fraga was in the rosettes agsin, this time with Titan de Pravia and the Canadian rider Samantha Vanderwoude, was third with Indiana II.

The 1.10m was won by Ellie Guy with Ijver.  Second was the rider from Monaco who has a great week here, Anastasia Nielsen with Donald de Bacon and third was Belgian rider, Cassandre Malherbe with Jazz de Torres.

The Young Horse classes were also running today alongside the CSI3*.  The 6/7yr old class was won by the German rider Irmengard Von Essen with Disney Park by Diamant de Semilly owned by Guido Klatte. Second was the Czech rider Ales Opatrny with Colin Z  and the Irish rider, Dermott Lennon with Anthem In My Heart was third.

The 5yr old class was also won by a German rider, Marc Bettinger with Cornetto DB Z a stallion by Cornet Obolensky, dam sire Inshallah De Muze. They completed the second phase in just 23.31sec beating by a hair’s breadth, the Spanish combination of Álvaro González de Zárate and Kwak Fly who finished in 23.32sec. Kwak Fly is by the lovely stallion Utah Van Erpekom with the dam sire Voltaire.  The Slovenian rider, Gaj Riossa was third with Kaboem D’Oase.

And with these results we finish off the fifth week of jumping here at the Autumn Tour and head towards the final week with great anticipation to start off the next round of competition and of course the Nations Cup.