The British rule the day here at the Sunshine Tour 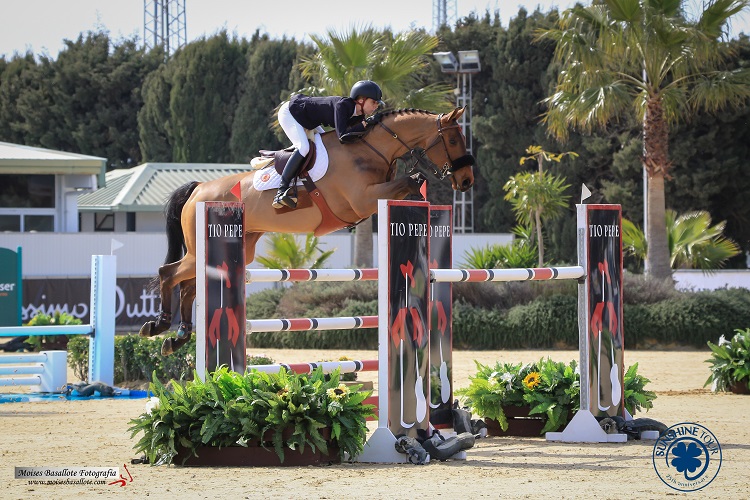 It was a very successful day for the British riders here at the Tour with wins in six of the ten classes and fourth place in the 1.45m, Small GP class, for James Wilson with “Eskola M”.  This class was won by the French rider Alexandra Paillot on “Pembroke 3” in a mere 36.28s.  14 horses went through to the jump off and 9 had a second clear.  Both Second and third places were taken by the Dutch riders, Hendrick-Jan Schuttert and Johnny Pals (resp) in a very competitive and exciting end to the class.

Jake Saywell (GB) was last week’s winner in the CSI2* GP and again proved that he is on top form, winning today’s Big Tour B, 1.40m. Lisa Cubitt (NZL) who has repeatedly been on the podium here, took the win in the 1.35m A2 class and Holly Smith (GB) was the winner in the 1.30m A1.

The Medium Tour classes had two more British successes from “Caruso D’eres Z” ridden by Max Routlege in the 1.40m and Jay Halim riding “Abrisco” in the 1.30m.  The 1.35m was won by a Brazilian rider for the second day in a row, this time, Carlos Eduardo Mota Rivasand the 13yr old  KWPN “Brilexo”.

There was a British top three in the 1.25m Small Tour. Tim Gredley flew around the two phase special course taking both a convincing win and second place on the Unex competition stable horses, Arantos and Omega Star. Nathan Bull was third on Milton Van Vrijhern.

In the 1.15m class the winner was Lucy Wood (GB), second was Yingfeng Bao  for China and the young Spanish rider, Jaime Fernandez Rey, was third on “Fleuros”. Juan Miguel Febrer Riu was 7th”.

Tomorrow the 1.50m, CSI3* GP sponsored by the ‘Diputación de Cádiz’ will be held in the Main arena and will be the highlight, of this second week of competition at the XXV Sunshine Tour.Escribe aquí tu cuerpo para la noticia