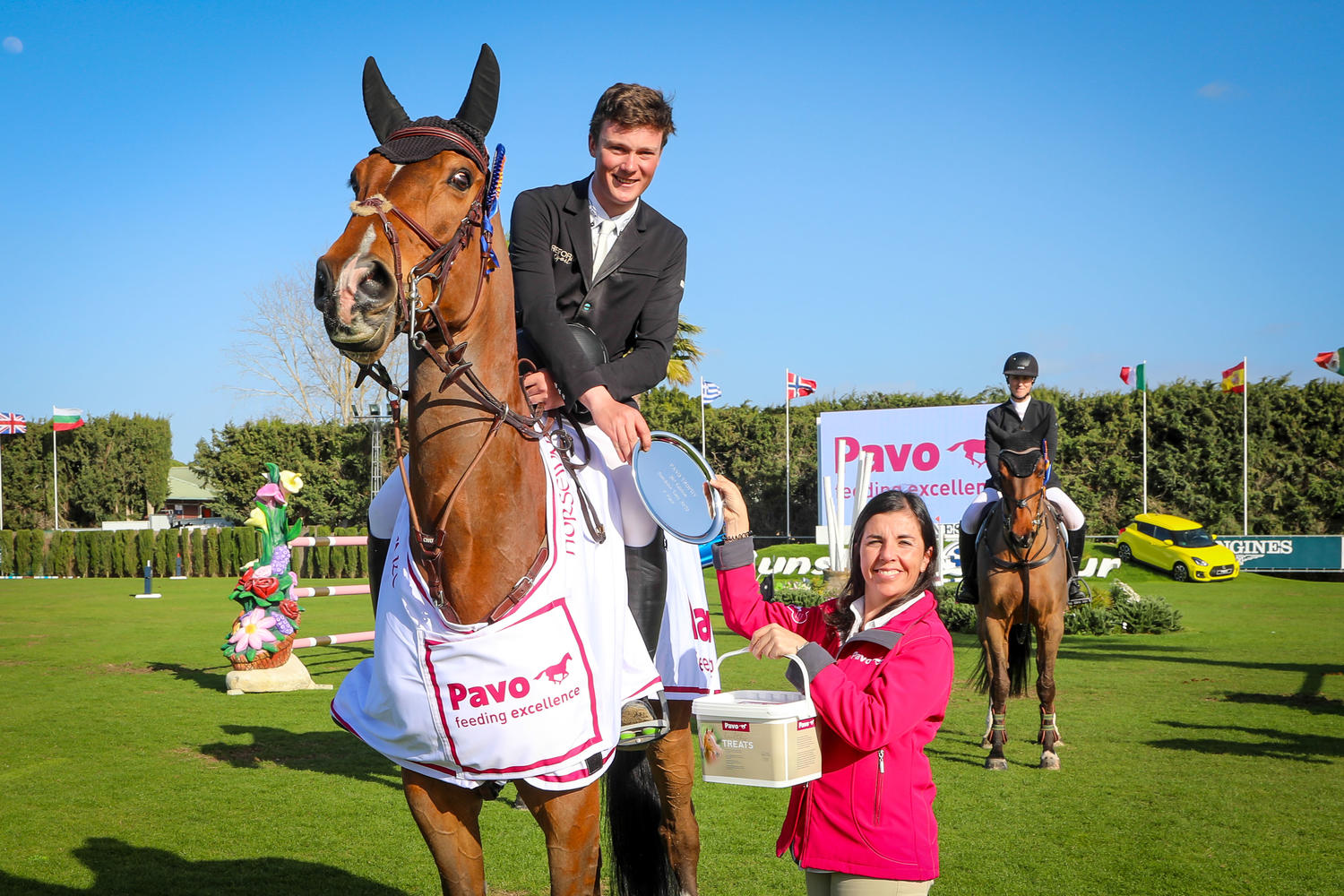 The CSI3* today had a total of 836 horses on the start lists. The highlight of the day was the 1.50m, Big Tour that was sponsored by Pavo the equine feed specialists.

The class had a lot of competitors and was finally won by the Irish rider Michael Duffy. Michael is 26yrs old and was the youngest rider to ever win the Irish National Championships. He has already represented his country internationall, including in Nations Cup rounds. Today he was riding his own “Jeff Ten Halven” an 11yr old gelding that he has been competing on for the last 2 months.

In the 1.45m Big Tour, the winner was Marcelo Chirico from Uruguay, with “QH Baloudarc LF”. The Chilean rider Agustín Covarrubias came top of the 1.40m and in the 1.35m, Bernardo Cardoso de Resende from Brazil, was the winner by more than 4sec with “Mombay”, in this accumulator class. The well known Spanish rider Rutherford Latham had a super round and came 4th on the 8yr old “Cash du Rozel”. The 1.30m Big Tour class was won by Portuguese rider Rodrigo Sampaio.

The Médium Tour was dominated by riders from three countries, Great Britain Spain and Belgium.

Jessica Hewitt won the 1.40m with “Hot Bluebird”, in a class with 91 competitors sponsored by Cadena Ser. The Spanish won the 1.35m in a testing class with 112 entries, that was held in the Deister arena. Fidel Dávila,a rider for the Yeguada Finca Maeza, riding the experienced “Chantre 34” beat off two Belgium riders, Bart Clarys and Luis Felipe de Azevedo who took 2nd and 3rd resp’.

“ “Chantre” is a mature horse and he is super competitive with a lot of quality, he is the horse I have bought to be competitive on. It’s not that he jumps very big but without doubt he is the best competition horse that iI have ever ridden, he always wins a class no matter where we go.” This Spanish rider is here for two weeks at Montenmedio, training his younger horses. “I have bought 6 young horses here with me that I believe can become really good and the truth is that we don’t have the opportunity everyday to jump them in a place anywhere near as good as this. At the weekend I will bring three mature horses.” Yeguada Finca Maeza, is in the North of Spain in Asturias. This is a very beautiful area in the foothills of the Picos de Europa. The farm specialises in breeding sporthorses. For the 2020 season they are opening up their fantastic installations to the public and running two international 2* competitions in July.

The swift British rider Kayleigh Watts riding “Arko’s Girl Z” has once again won a class in fine style. This time she had 4 seconds in hand over other Brit, Scott Dollemore. The class was a very competitive 1.25-1.30m class where the optimum time was extremely tight. The Belgian rider Stephanie Falisse was third with “Feoniki GB”.

In the Small Tour there were more British victories, Kyle Bedford and Sophie Holliday were winners of the 1.10 and the 1.15m with “Princess of Mónaco” and “Westerhofs Limit”, respectively and in the 1.25-1.30m that had 81 entries, Jason Foley was the winner with“Castlefield Sapphire”.