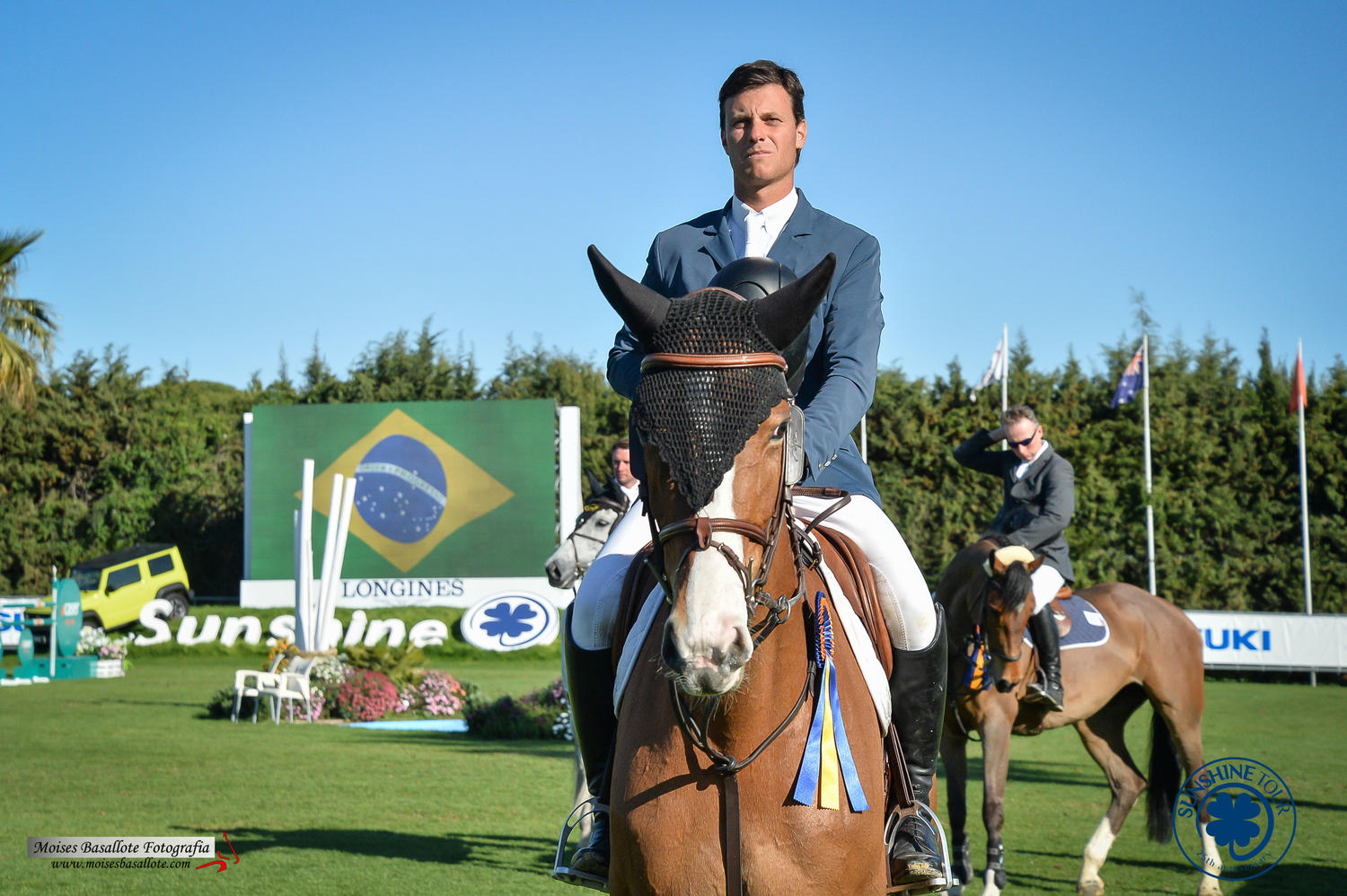 There were a large number of riders through to Small Grand Prix jump off.

There were a large number of riders through to Small Grand Prix jump off.

The Brazilian rider once again gave the other riders a lesson, in neat, speed riding, with two impeccable rounds in the 1.45m, Small GP today.  Riding “Anaya STE Hermelle” he beat off 24 riders in the jump off.  “I am very happy.  It was a Grand Prix class with a lot of clear rounds and we were competing against both riders and horses, with a lot of quality.  Once again the mare jumped really well.  She is a fantastic mare.  On Thursday we had a small accident in the Big Tour class, so I am very happy that she came out with confidence today and we were able to win this Small Grand Prix.”

With this win, Pedro and the mare have, so far, won three important classes and are dominating the results here at the Tour. This may well not be the last time we see them on the podium, they are both in great physical form as they have demonstrated over the past weeks.

Today was a day of successes for the Irish riders. Richard Howley riding  “Farianne” and Dermott Lennon with “MJM Pursuit”, who was last week’s Small GP winner,  took well deserved, second and third places today.  Trevor Breen, was the winner of the 1.30m riding “Billy Drizzle”. The young rider Darragh Ryan, who just graduated from the ‘Young Riders Academy’, was the winner of the 1.40m Medium Tour, riding “Sir Landal Joter”, with Greg Broderick taking second.

In the 1.40m Big Tour, another Brazilian rider, Pedro Junqueira with “Chacote”, beat the Spanish rider, Gonzalo Añon and “Ad Amigo B” by more than a second.  In third place was Lisa Cubitt, a very familiar face on the podium here at the Tour.

The winners of the Small Tour classes were the Spanish rider, Juan Miguel Febrer riding “Nolwen Alia Z”in the 1.05m; another Irish rider, Max Wachman and “Cesha Old”in the 1.15m and finally, the British rider Jay Halim and “Abrisco” in the 1.30m.

As a new feature, in the Small GP the “Molly Ohrstrom Award”was presented to the groom of the‘Best Turned Out’ horse. This also carries a prize of €1000 for the winner, “Berdenn de Kergane”, who was deemed the most elegantly turned out, and is ridden by Laura Kraut.

Mariano Martínez and Quicksilver are today’s winners of the 1.40m Big Tour Class

David Will and Forest Gump 29, once again win 1.45m Ranking Class for Germany

Mariano Martínez and Quicksilver are today’s winners of the 1.40m Big Tour Class

David Will and Forest Gump 29, once again win 1.45m Ranking Class for Germany